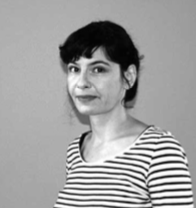 She is a French illustrator and comic book artist who has designed posters for the Angoulême International Comics Festival and Tulle's theater as well as contributed cartoons to newspapers and magazines including Le Monde, Libération, Femme Actuelle, Femina, and Bang (many of these drawings can be found on her personal website).

Peggy has authored and drawn numerous graphic novels in addition to her most famous work Luchadoras, written in French and translated into Spanish, Italian, and English. She has also contributed complete comic strip stories to publications like Bile noire and comic anthologies.

Peggy collaborates with Coconino World and many of her comics can be found on the Coconino website. In addition, Peggy has written and illustrated many works of children's literature.

She now lives in Geneva, where she is engaged with her new community and designs posters for the library of Paquis and for the Spoutnik Cinema in addition to a regular comics section in Le Courrier newspaper.

Peggy Adam's blog with her comics from Le Courrier, festival and exhibition information, pictures from her travels to Japan & elsewhere, and pictures/information/stories of her Minisolex dolls.

Peggy Adam's Ultra Book site with her illustrations and artwork from all her books.

Peggy Adam: Writing about her own art

Tchétchénie  n.d.  Published on Coconino World.
Artist statement about the comic Tchétchénie. Read online (click on Peggy's name, first on the list on the left).

"A Strange Kind of Courage: An Interview with Peggy Adam." Avoid the Future. 23 Mar 2011.
An interview about Adam’ comic book Luchadoras. Read online.

Luchadoras. Blank Slate. 2011. Available at OCADU Library.
Graphic novel based on the real-life murders of over 400 women in the Mexican border town of Ciudad Juarez. Available in English.

Terriens: planches contre le racisme. Montreal: Mécanique générale: Les 400 coups, 2006.
Peggy Adam is one of 29 artists who contributes to this book of comics

La Maison Close. Various artists. Paris: Delcourt, 2009.
Peggy Adam is one of many artists who contributed to this book of comics.