History of a building

Westside Lofts is located at the corner of Bathurst and King in an area that was once the commercial and industrial heart of Toronto. It is a 1998 loft conversion of a 1970s-style precast warehouse.The warehouse was purpose-built in 1987 for the fashion industry with 12-15" thick concrete floors, and ceilings 12 feet high. The 1987 structure incorporates the silhouette of a listed 1907 heritage building that was inadvertently demolished by a developer in 1981. In the 1970s, the Clocktower Building (as it was then known) was one of the Toronto warehouses that provided space for independent artists and designers. Another warehouse was at 2 Berkeley Street (known colloquially as the Berkeley Castle). The Clocktower Building and the Berkeley Castle were described as hives of creative activity.

[history of the Berkeley Castle] 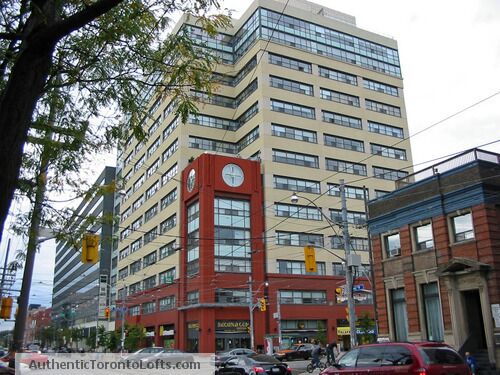 The first building on the site was erected in 1895 by the Toronto Lithographing Company. The address was then known as 680 King Street West.

From 1901 to 1944, the building was occupied by Otto Higel Co. Ltd., the most important piano supply house in the British Empire.

Between 1901 and 1907, there were three additions to the building, including an iconic clocktower.

In 1979 the Clocktower was designated as an historic structure.

In 1981 it was inadvertently demolished by a developer who had promised to preserve it.

The lot remained vacant until 1987 when a pre-cast warehouse building was erected to house the garment industry. The developer recreated the iconic clocktower that had been previously demolished.

A decade later, the property was purchased by another developer for conversion to residential condominiums.

The project architects for the 1998 loft conversion were Young + Wright and the interior designer was Mike Niven. Lauded as a “huge recycling project” by architect Drummond Hassan, the elements recycled in the conversion included “a staggering amount of concrete, the precast, the elevator system, the stairs, and two freight elevators”. The structure was so strong that the architects joked that you could drive your Harley right up to your unit. The nature of the building allowed flexibility in adjusting plans and locating units where buyers wanted, resulting in a surprising variety of layouts – no two units at Westside are the same.

The developer of the project explained the origin of the name as “the New West Side, or the Lower West Side, using New York terminology.'' The exterior was planned in the “art deco style” …existing architectural features were to be maintained and enhanced with additions such as cantilevered glass canopies reminiscent of the Helmsley Palace Hotel in New York City. (Unfortunately, the planned architectural enhancements, including the canopies, were never installed,

Although billed as “art deco,” some think the design is more postmodernist Memphis (which was established in 1981 by Ettore Sottsass and inspired by Art Deco and Pop Art, as well as 1950s Kitsch and futuristic themes).

Sheena Sharp, Associate Young + Wright Architects, defends the building as "an adaptive reuse of an existing structure that was not good-looking but was sound."

"The building was lifted out of the ashes in 1997, and has acted as a primary catalyst for what is now the vibrant residential community of King West. ... what was once a vacant industrial slab on a desolate intersection is now a breathing cornerstone attracting new retail, pedestrian, and urban activity. 700 King should be heralded as a great example of downtown revitalization, not absolutely dismissed as a blight.”