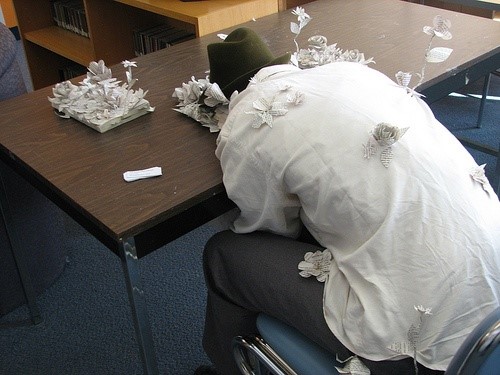 Suzy Wright stumbled across a reference to instructor Robert Holmes's death on the OCAD U Library's library history and was so inspired by the story, she created an installation in tribute to this dedicated instructor.

Robert Holmes was widely recognized as specializing in “flower drawing”: a subject matter which he pursued throughout his career. Holmes, a graduate of the Ontario School of Art from 1884, became the primary advocate for the establishment of a formal library. His support proved critical during the earliest phase of the library’s development, primarily in the contribution of his personal collection in 1930 of almost 300 titles which bolstered holdings by about one third.  In addition, he served as the school’s first “librarian” while still maintaining his position as lecturer in art history. Holmes filled the role of librarian until May 1930; the date of his untimely death.

It is perhaps worth noting that the gardening metaphor formed a part of his final words before a tragic death at the Arts and Letter Club in 1930. A report from The Globe chronicles his poignant last moments:

Tragedy and poetry were strangely mingled in the sudden death last evening of Robert Holmes, RCA, one of the most distinguished and popular of Canadian artists – tragedy because of its unexpectedness and poetry because of the setting and final words of the artist.  Death came to him at the Arts and Letters Club as he closed the address at the annual dinner of the third and fourth years students of the Ontario College of Art...He was surrounded by students and fellow-artists, and had been in the height of good-humour all evening.

George A. Reid, R.C.A., former Principal of the College of Art, had toasted "The Future of the College", and Mr. Holmes replied [to the toast].....He said, ironically, that he must have been assigned to that toast because he was something of a "futurist". "More likely, however," he said, "it was the affinity between my love of flowers and the flowers about me—the boys and girls in the graduating classes—who are the real flowers of life...." With the word "flowers" upon his lips, Mr. Holmes sank into his chair, and his chin dropped on his chest–his heart had given out, in one of the great moments of his life..

“Artist Falters, the Drops Dead During Speech – Robert Homes, Talking of His Love for Flowers, Collapses Suddenly – AUDIENCE IS HORRIFIED – Dramatic and Sad Event at Arts and Letters Club. The Globe, May 15, 1930, 1.