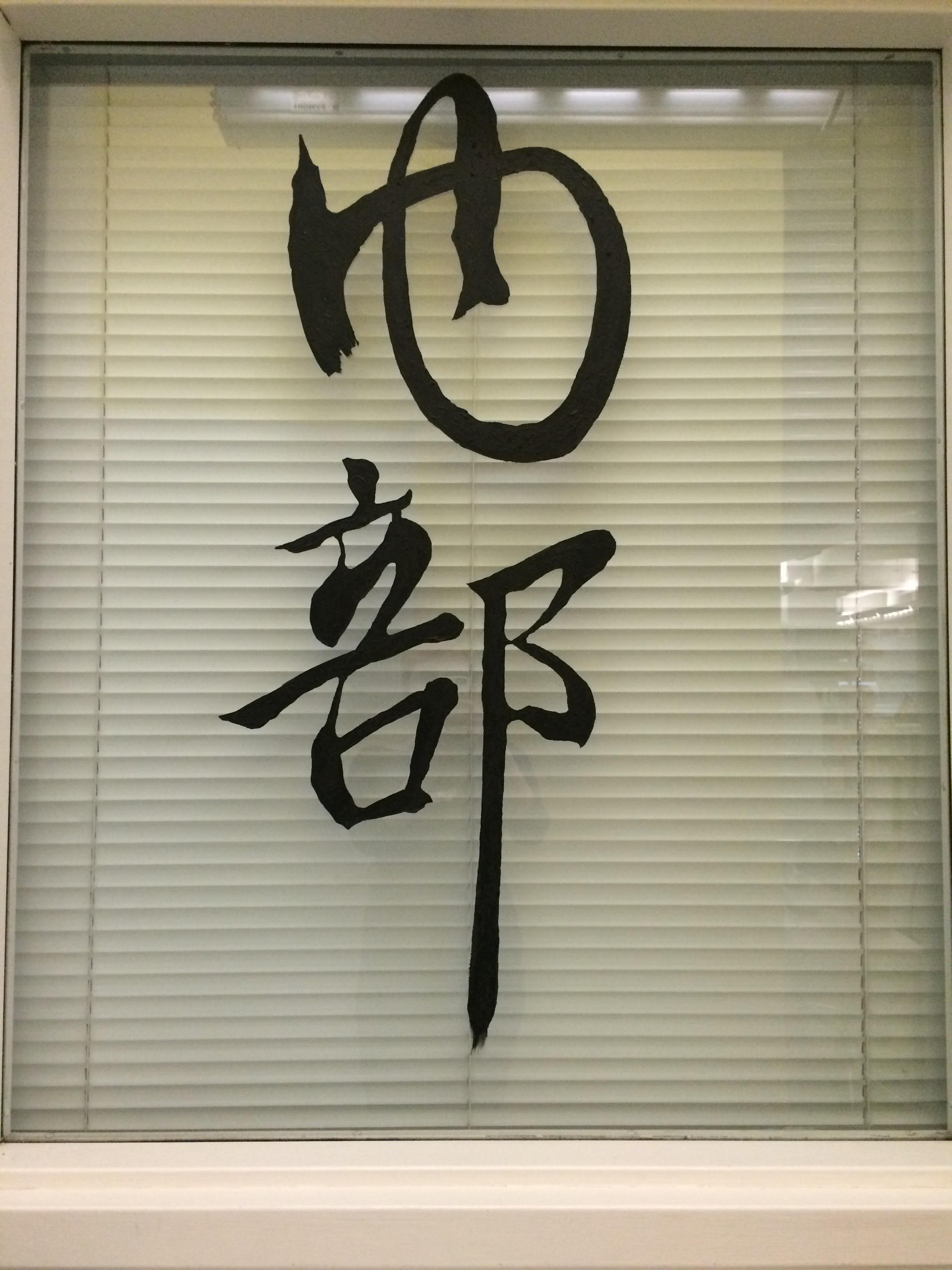 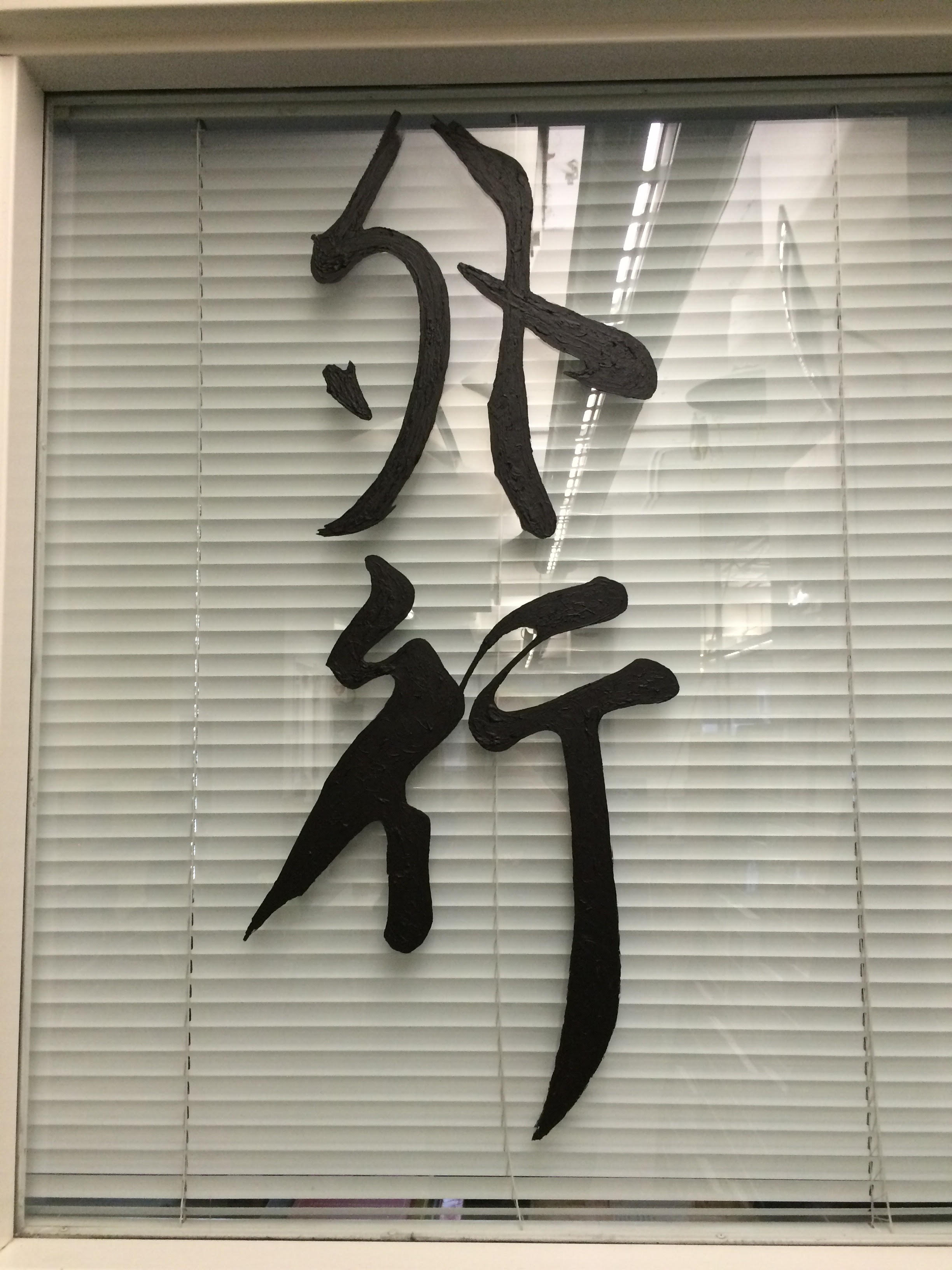 Chinese character lettering (hànzì) painted on the glass panel window to two librarians' offices, including that of the library director’s; the blinds on the interior of the office serve as a backdrop for the work.

These two calligraphic paintings, composed almost as a diptych, explore the tensions between transparency and opacity that can occur in the exchange of information through the visual iconography of language and communication. The text on the first window presents the characters 外行 meaning “outsider, amateur, layman,” while its antonym, 内行  “professional, experienced, expert, insider,” is transcribed on the other.  Painted on two interior windows to two OCAD U librarians’ offices, the black lettered characters, ironically, serve to block viewers from seeing through the window. Likewise, the interior blinds in both office impact the legibility of the text; in this case if the blinds are closed, the text is more easily viewed against the white background. If the blinds are drawn open, the text becomes almost illegible against the darkened office space. Such visual cues almost inevitably refer to the signified iconography of the Yin and Yang symbol, which translates literally as “light” and “dark.” Given the location of the text and its legibility issues, such a reference seems unmistakable.

In conducting the studio critique of the work, the library’s collection development policy on language was discussed which includes a set of protocols indicating that all materials must be written in English, or for bilingual or trilingual publications, one language must be in English.  Such practices may seem antithetical to inclusivity and diversity; however, the collections policy must serve as a mirror to the curriculum; in this case, all classes at OCAD U are taught in English only. The collection, as a result, must reflect this stark reality. From a student’s perspective—as a member of a growing body of international or ESL populations—such linguistic authoritarianism seems incomprehensible.

It is telling that these terms are used in a library setting where, ideally, no library user should be an amateur. Libraries should always adhere to the Statement of Intellectual Freedom as a foundation of all services; a document that empowers users to take control of their research needs. A library patron should never feel disadvantaged or disempowered by her/his/their collection; the reason it exists is specifically for a community’s needs. Thus, they are the experts in defining what they need from a library!

Considering the antonymic relationship, viewers might read a note of satire, especially with the term “outsider” which can be read clearly from the outside of the window, yet on the inside, the text appears backwards. Allusions to Edward Said’s concept of “otherness” seem to be evoked, especially considering the window is between two different interior rooms—one being the Library Director’s office—which are separated by a wall and locked door, rather than a window facing the exterior world. In this case, it is not clear which space—the library proper or the library director’s office—is “outside” given that technically both are inside the library.

The work also explores using letters as a “symbolic” form of imagery that can bridge “otherness” through communication, yet is at the same time isolating. Any letters, characters, hieroglyphs or symbols used to convey ideas communicatively rely on an abstracted iconography that does not specially reference any tangible, real-world objects. In order, for example, to fully comprehend the student’s work, one has to be able to read Chinese hànzì.

The visuality of the student’s work in its homage to Yin and Yang, however, does seem to lend a sense of balance and proportion to the concerns the work raises about equity, privilege, and access to language. Wong seems to position the library as the ideal location to unpack such dichotomies. In fact, such tensions are required to ensure that there are open lines of communication between libraries, library policies, librarians, the curriculum, and student needs.