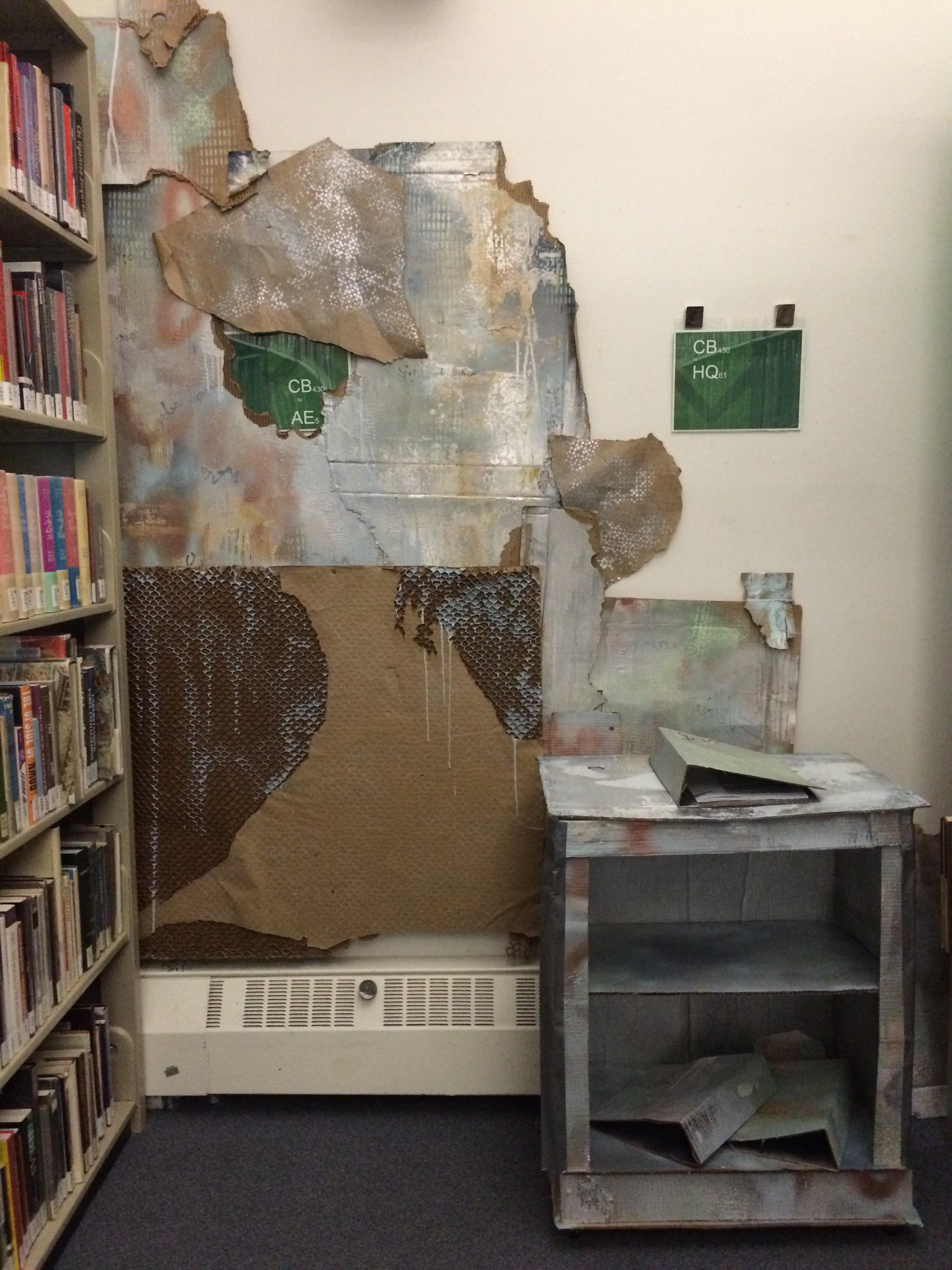 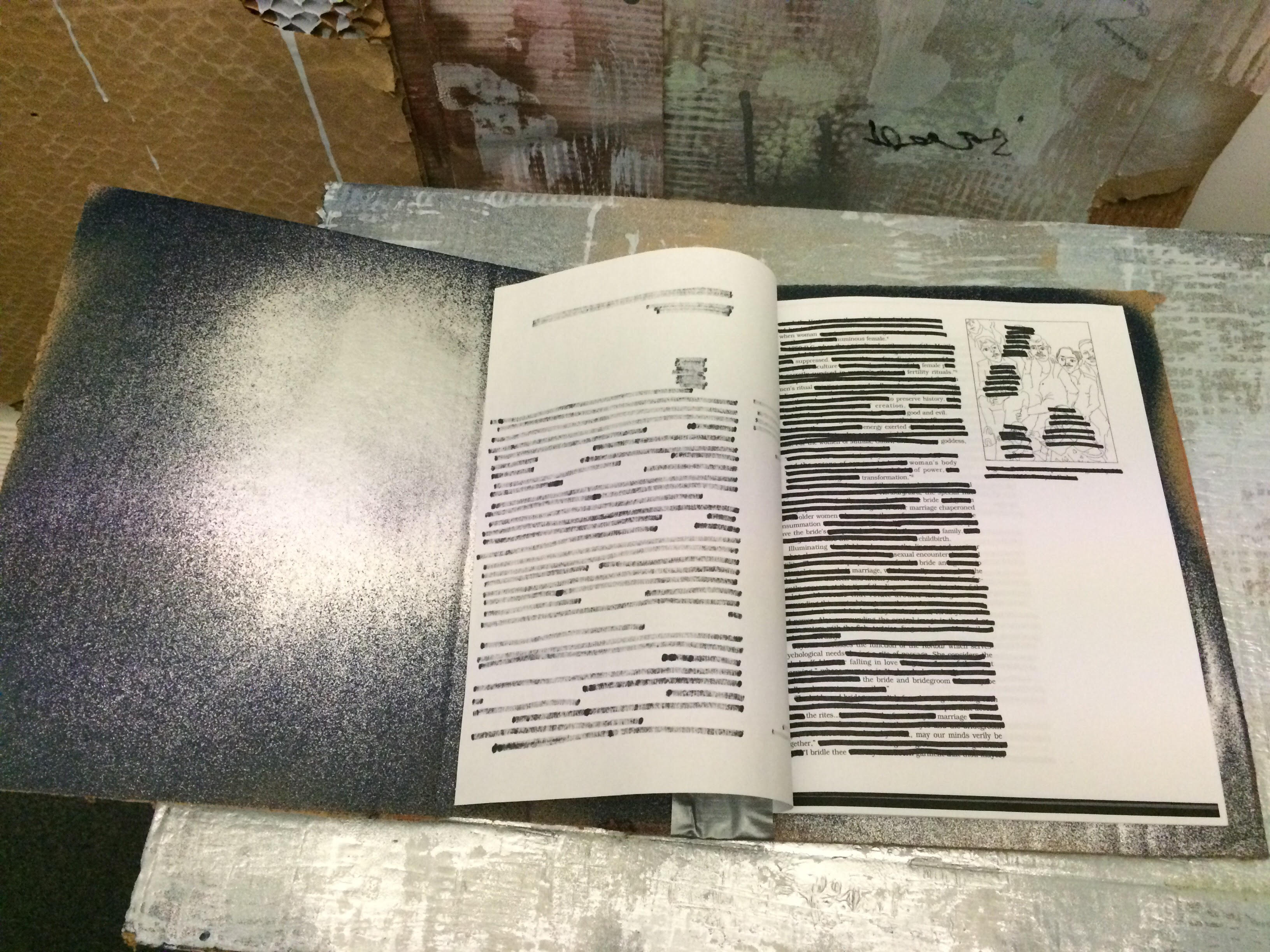 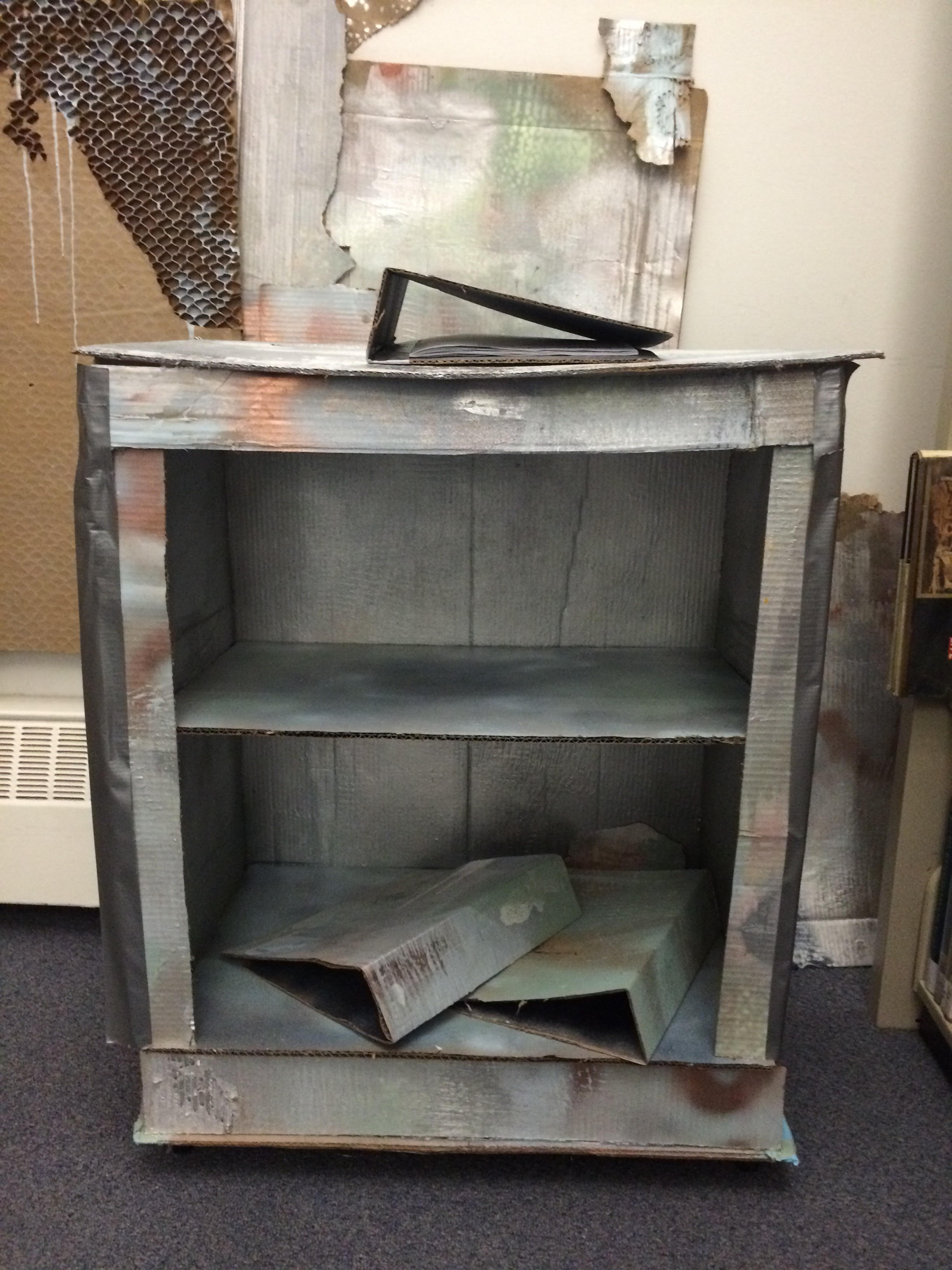 Cardboard panels affixed to wall (roughly 6 feet by 4 feet) with a false cardboard encyclopedia stand in front on wheels. One three ring binder is positioned on the desk with copies of pages from books where the majority of text has been censored using strikethrough lines. Few words that are left legible; however, short phrases are decipherable that indicate problematic, gendered concepts. Several pages include images of women that also have been censored using horizontal cross-hatched lines.  Two other binder covers are included, but these false books have no interior content.

Although not immediately apparent to the viewer, this installation references issues of information equity and how, traditionally, women and minorities have been erased from history texts. The work is untitled, conveying a powerful message of the countless untold stories of women of the past, whose histories, writings, or artistic creations have been hidden, appropriated, or otherwise denigrated through arbitrary hierarchical distinctions between art and craft; high art and low culture; literature and “dabbling” in writing.[i]

The message of Rogers’s installation could easily be overlooked; it is only through directly interacting with the work by opening the binder (fig. 1) that the meaning of her work can be discerned. This compulsion imposed on the viewer to interact with her artwork serves as an appeal to her audience to move beyond passive spectatorship and to fully engage—using both mind and body—with the conceptual ideas encoded in the art piece. Likewise, the concept that the full message of the work cannot be understood without the “directions” hinted at in the physical (albeit “fake”) book offers a resounding endorsement for the enduring power of print information objects. Yet, conversely, is Rogers also critiquing the fetishization of the book object by creating a crude simulacrum version of a text? Such a reading of the work inevitably hearkens to the theories of Baudrillard whose belief that the modern “simulation society” has become so comfortable with and in fact reliant on fabricated, recreated models of reality, that people have lost the ability to understand the real world unless it is filtered through a mimetic product of technology.[ii]  Taking this theory beyond a single text to the entire collection creates a disturbing view of the library as an esoterically abstracted version of the world; one that is powerful in its ability to codify historical, scientific, or literary voices through its printed books, but ultimately it is a space that is devoid of life and can only offer a refracted distortion of reality through its collections.

The subtlety of Rogers’s feminist message is purposeful, in that the artist seeks to critique assumptions that are so deeply entrenched in a cultural viewpoint that they are—as Michel Foucault so cogently describes in the Order of Things—taken to be as natural laws.The use of torn scraps of cardboard, spray-painted randomly as if vandalized, is a visual cue to the sense of decay in traditional modes of academic inquiry. The cardboard encyclopedia podium (fig. 2) solidifies this skepticism, given the inevitable association that this platform designed to store the works of the Encyclopédistes of the Enlightenment in their attempt to encode all human knowledge in one consolidated information object. The empirical rationalism of these early Enlightenment theorists was couched in a lexicon of scientific terminologies, yet these discursive practices often became patriarchal means of silencing alternate histories. The printed book, by proxy, becomes an unwitting forum for propagating and disseminating such disingenuous ideologies.

The use of cardboard is a preferred medium for the artist who is exploring its capabilities through a series of works. The material could be read as a metaphor referencing packaging of commodities, transportation of goods in a globalized world, or how boxes are often used to create false illusions (such as being used to construct temporary play houses for children).With the advent of a globalized market place and infinite choices for online transactions, the impact on the book trade has been monumental.Libraries, book stores, and other purveyors of print materials have had to significantly re-evaluate core practices and look to new models to maintain viability of print culture overall.The medium--cardboard--has become the message of doom for many traditional facilities dedicated to organizing and preserving knowledge; turning these institutions into cardboard representations of their former identities.

As a further note on medium: interestingly, during the critique, the artist described the laborious process required to prepare the cardboard for display. Although it appears haphazardly informal in appearance—almost as if the artist found the cardboard in the garbage—the collaged pieces were carefully painted and, due to fire safety regulations, had to be sprayed with a fire-retardant. The process required significant time commitment (including unexpected issues such as in the drying process, the cardboard got caught in a torrential rain storm which required restarting the whole process); a process that seems almost inherently representative of the thematic intent of the installation: the unacknowledged, hidden labour embedded in finished products produced by women.