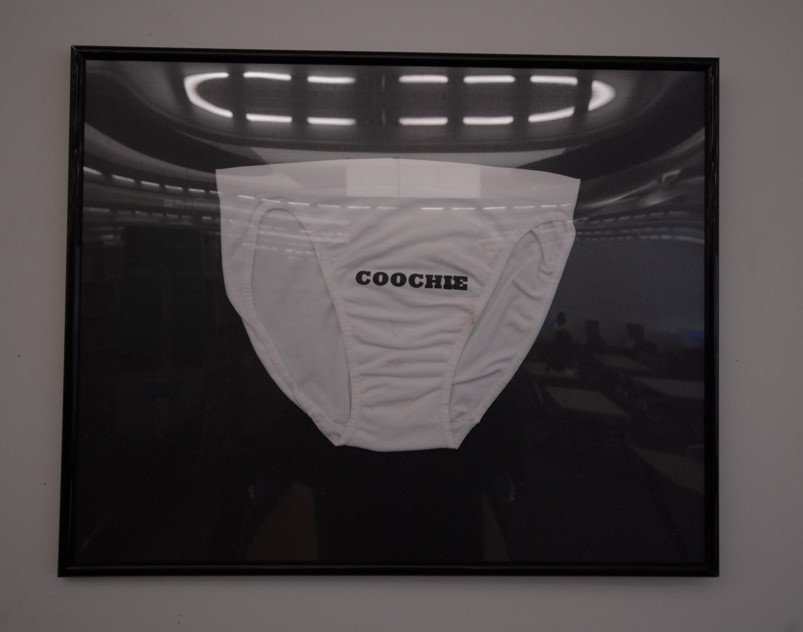 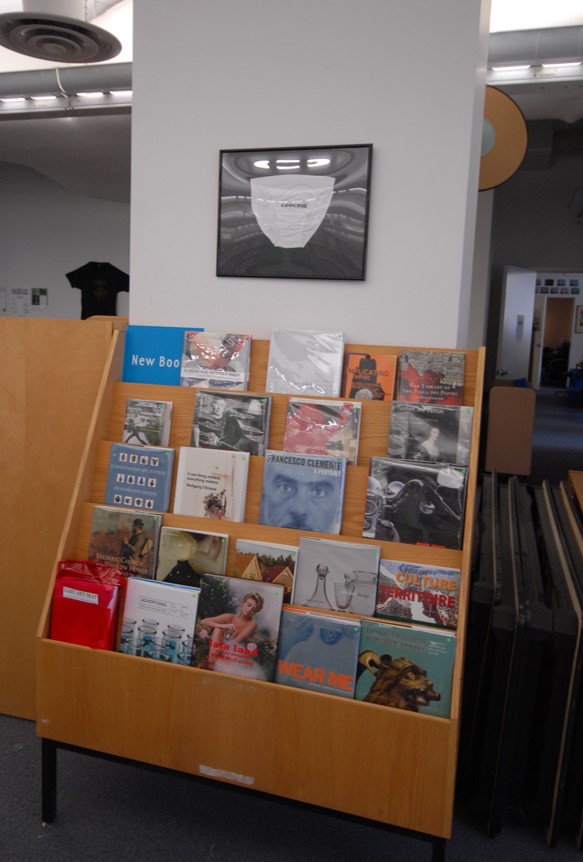 One of the more controversial works in our library exhibitions, created by Kaitlyn Holland, was titled Dirty Little Secrets (or as we termed it "Information as Underwear").  Holland displayed men’s and women’s underwear in a black frame with matte black background; printed on the crotch of each pair of underwear were derogatory slang words used to describe women’s genitalia. A dozen of these works were displayed throughout the Library.

Libraries are competent in describing and organizing both print and digital information, as long as the text or images have been captured in some form of container. At the OCAD Library we have numerous books about fashion, but do not include the actual objects themselves. Our systems fall apart, however, when we are dealing with a non-reproduced object, something that hasn’t been “contained.” Clothes are a direct example, yet they represent one of the foremost ways that socio-economic groups “talk” to others in our community.  The use of frames to display the underwear taps into this discourse; yet the framing flattens the garments, subtly pointing out that clothing loses most of its direct socio-cultural meaning, and in this case its sexual implications, when it is not actually worn on a person’s body.  I wonder if Holland is suggesting that we institute clothing lending libraries?

The force of Holland’s work lies in how much information is encoded on her chosen medium (underwear!).   Seeing the words printed in block letters makes for disturbing readings that are especially insidious given that underwear is such a personal item of apparel and not usually displayed in public.  Using this as a metaphor, Holland indicates how misogyny is often times buried deep in our psyche and is rarely “presented” in a public manner.  When underwear does make a public appearance—as is happening more frequently in the popular fashions of Madonna, Brittany Spears, or rap singers with drooping waistlines—many claim it as an example of liberation from strict social confines, in the case of women: the “girl power” slogan seems to codify this ideology.   But Holland’s inclusion of deeply disturbing texts, that describes only female anatomy, directly critiques this delusion of liberation and, through her use of both male and female underwear, implicates both genders in this equation.    Ultimately, what impressed me the most about this work, is how the context within which the text is presented influences its signified meaning: I shudder to think of the outrage our user community would express if Holland had scrawled these obscenities as graffiti or printed them on blank paper affixed to our walls; yet printed on underwear they elicit a host of conflicting ideas that communicate forcefully with the viewer.   As a result, we did not have one library user comment negatively on the work, and we still, in fact have a few remaining works displayed in the Library currently.