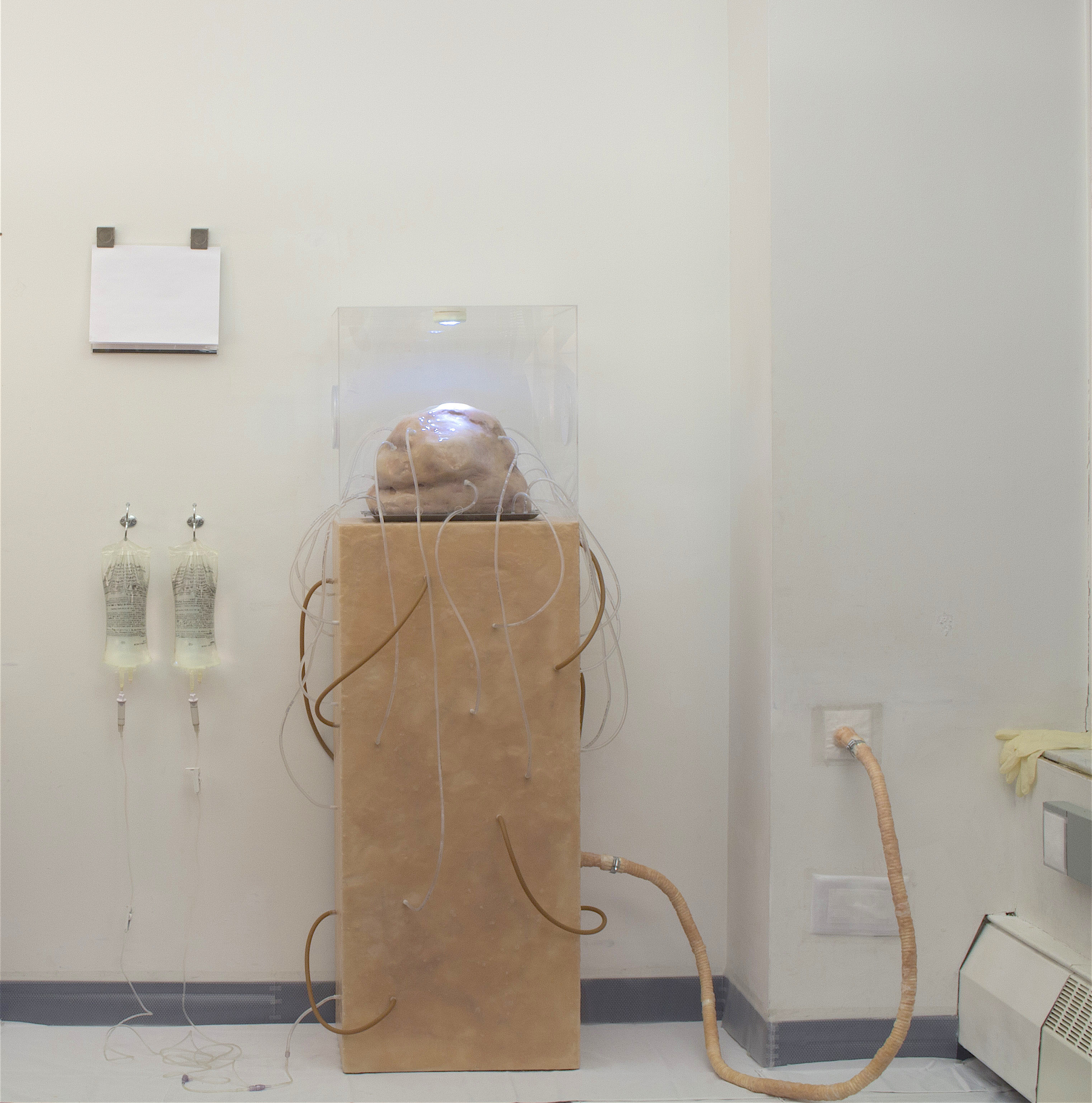 Marli Davis is a multi-disciplinary artist exploring parallels within Art and Science. Investigating the Medical Institution by challenging dualities among horror, care, sterility and domesticity. The incubator illustrates the technological modification of the uncrated-body. Linking Medical Apparatus’ to the embodiment of specimens. In this, Davis questions the force compelling circulatory exchanges between organic-bodies and the medicinal machine. 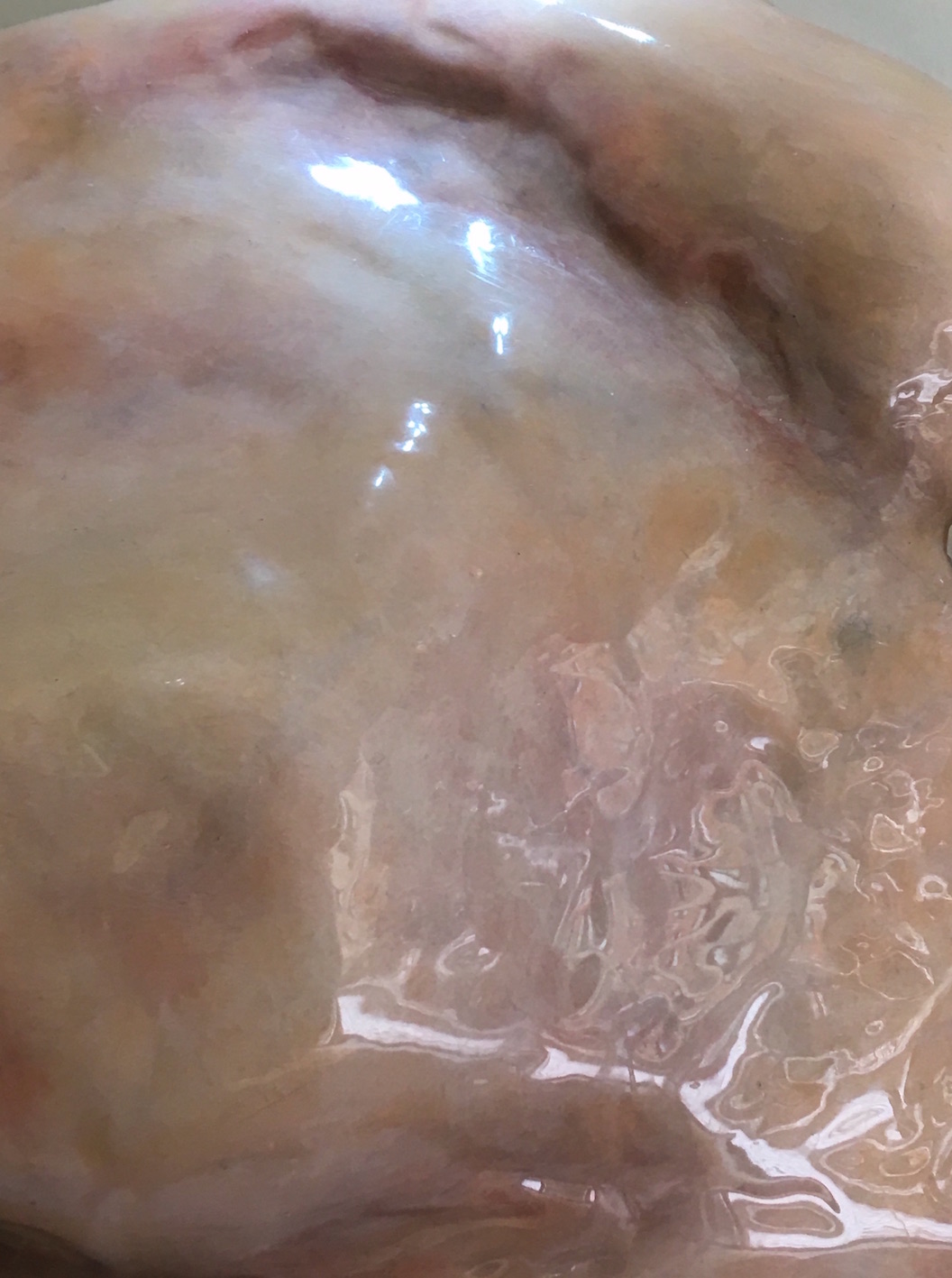 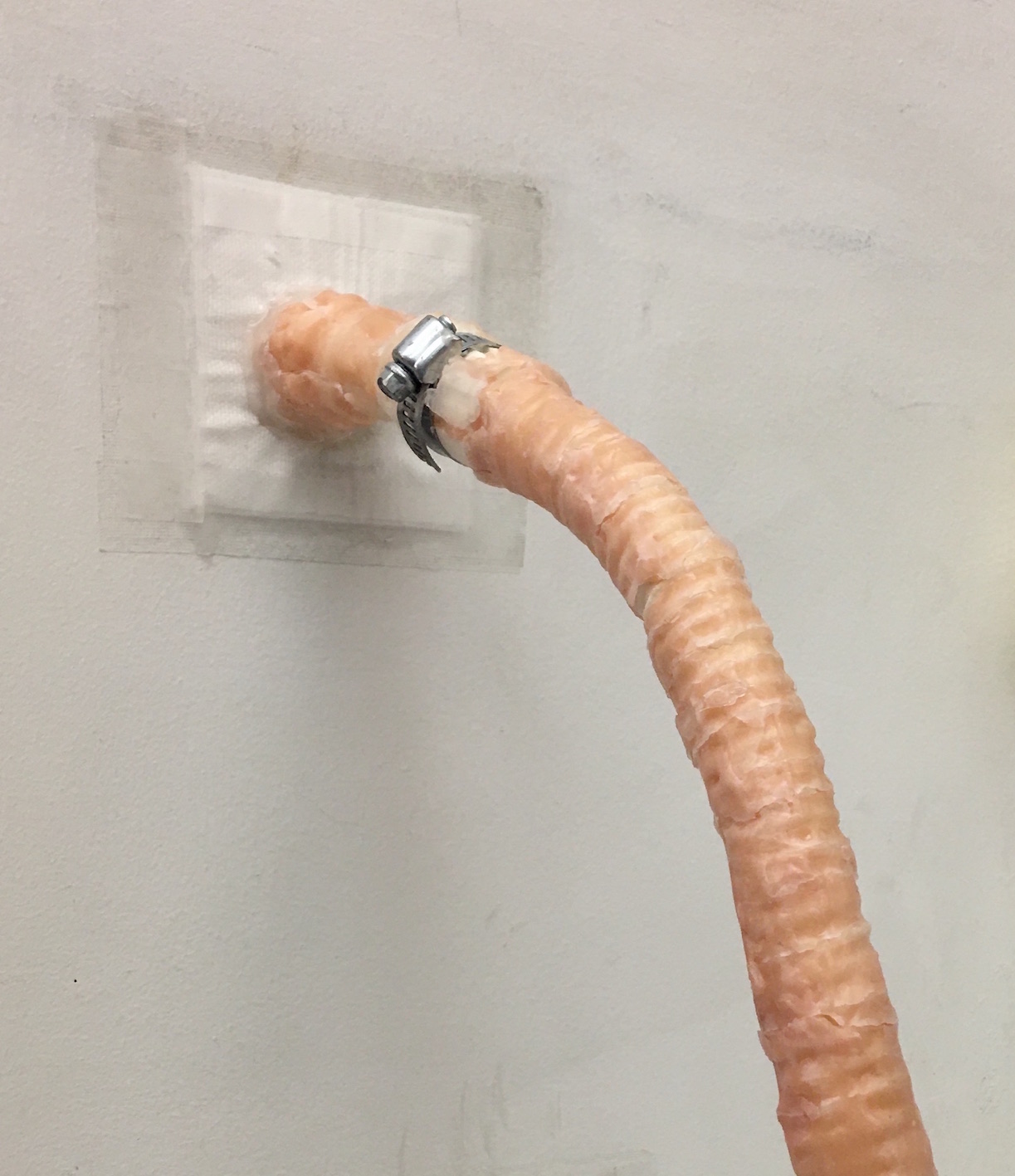 Marli Davi's Circulatory Predecessor was installed in January 2020, then the critique--held in the library--occurred one month later in the last week of February.  When discussing the work in context, as a reflection of information literacy principles, little did the attendees and notably the artist herself realize how prescient and incredibly topical the work was to become. By mid-March (the infamous Ides of March) the Library and overall campus had closed due to the Covid-19 pandemic.

All participants in the critique were riveted by the visceral reactions elected by this installation piece which truly represented a gesamtkunstwerk. All elements of the work--from the confusingly elaborate title, to the disturbingly organic texture of the resin-based material treatment, to the disorienting array of peripheral details (tubes, clipboards, IV bags, etc.)--conveyed a unified message of the clinical distancing used when designing objects for treating people in a health-care scenario. Although the title references aspects of procreation and maternity--intensely human experiences that involve mind, body, values, and emotions--the structure of the protective superstructure surrounding the mysterious brain-like organism seems sickeningly off-putting, if not horrifying. Resonances of the gruesome visuality of Canadian filmmaker David Cronenberg's The Fly (1986) or Naked Lunch (1991) are evoked; imagery that might be seen an artistic extension of  Mary Shelley's Frankenstein; or, The Modern Prometheus (1818) where the implications of creating human life using scientific methodologies is a result of the inhumanity of uninformed, unchecked, even unethical empiricism. The gendered medicalization of the childbirth process seems inevitably evoked, demonstrating how the traditionally male-oriented field of modern medicine can surgically remove the humanity from reproduction and, through clinical observation and dissection, turn it into a form of malady, in not disease. It does throw into question the medical establishment's commitment to "do no harm": who is given the power to define that which is harmful to individuals?

The location of the piece, situated in the back corner of the library space proximate to the back-issue periodicals, seems apt. As information on health-care research is almost solely conveyed through the peer-reviewed journal literature, this offered the ideal location for a work that is so openly influenced by the visual and material culture of medical sciences. Yet the distance of the work from the organizational sequencing of the print serial titles resonates with how science journals are now almost solely accessed in electronic format. Although the titles are direct replications of the print versions which, up until the advent of full text databases, were used ubiquitously by researchers in the STEM fields, their presence in online databases somehow removes these publications from the tangible physicality of the print collection. Does this virtual removal of research and inquiry from the place-based nature of the print collection--which serves almost as a microcosm of the world within the library's walls--impact how we contextualize this information within a continuum of ideas? Do database vendors, academic publishers, even IT specialist become the progenitors of information organization rather than the librarian, who traditionally held this role?

Marli's work became caught up in the pandemic closure of the entire campus. As the decision to close the library occurred so quickly, there was no ability to de-install the work and it ended up languishing in isolation within a dis-used and silent library space for three months. The theme of isolation and disoriented distancing seemed utterly complete through the unexpectedly aleatoric nature of the pandemic's impact on culture. But more presciently, the visual and material culture of science that focusses on specimens, clinical research, and physical isolation couldn't have been more evident through Maril's installation. Little did we know in late February 2020 that, within a mere two weeks after the critique, Marli's work would take on such new and viscerally meaningful implications! 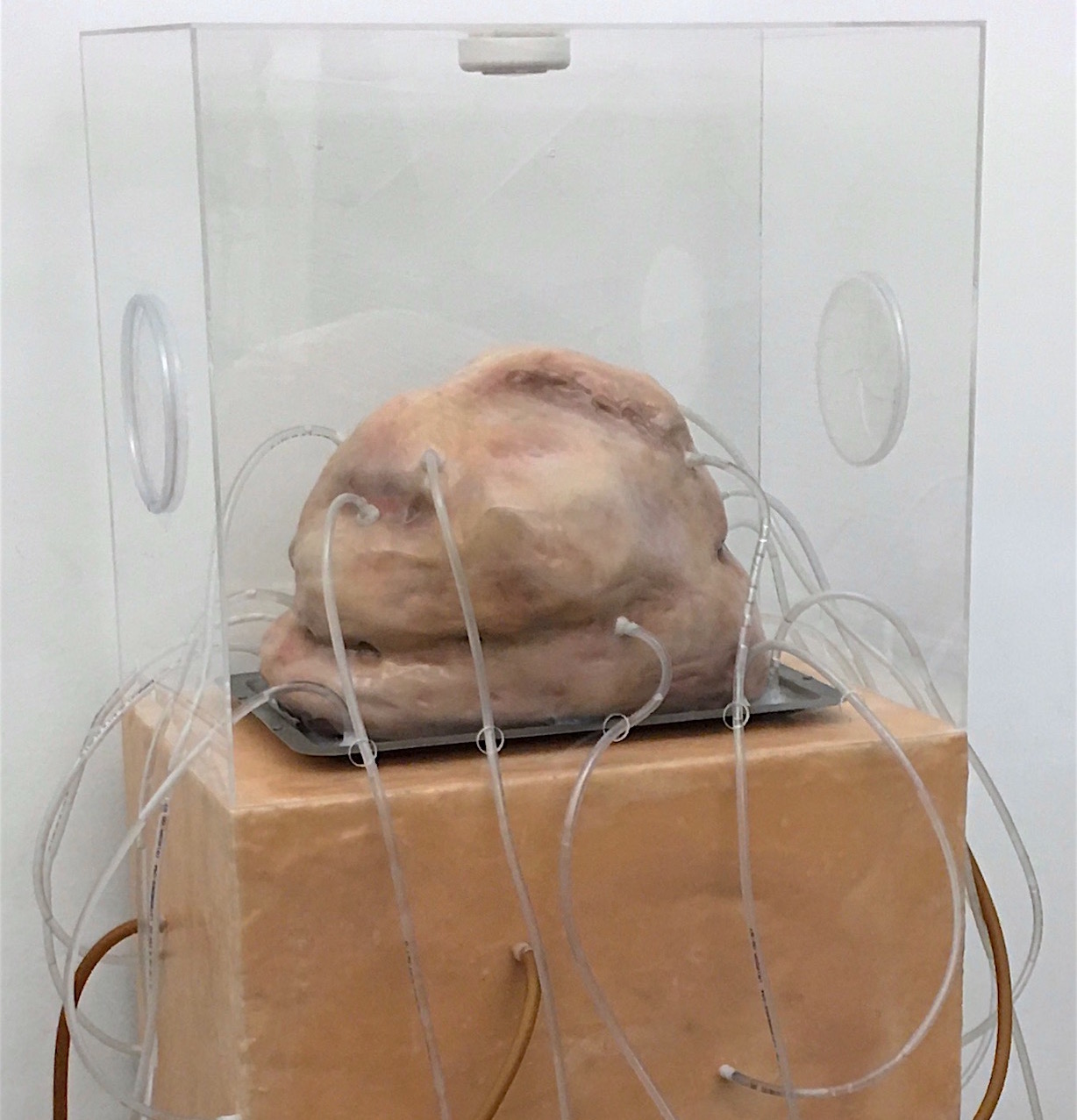 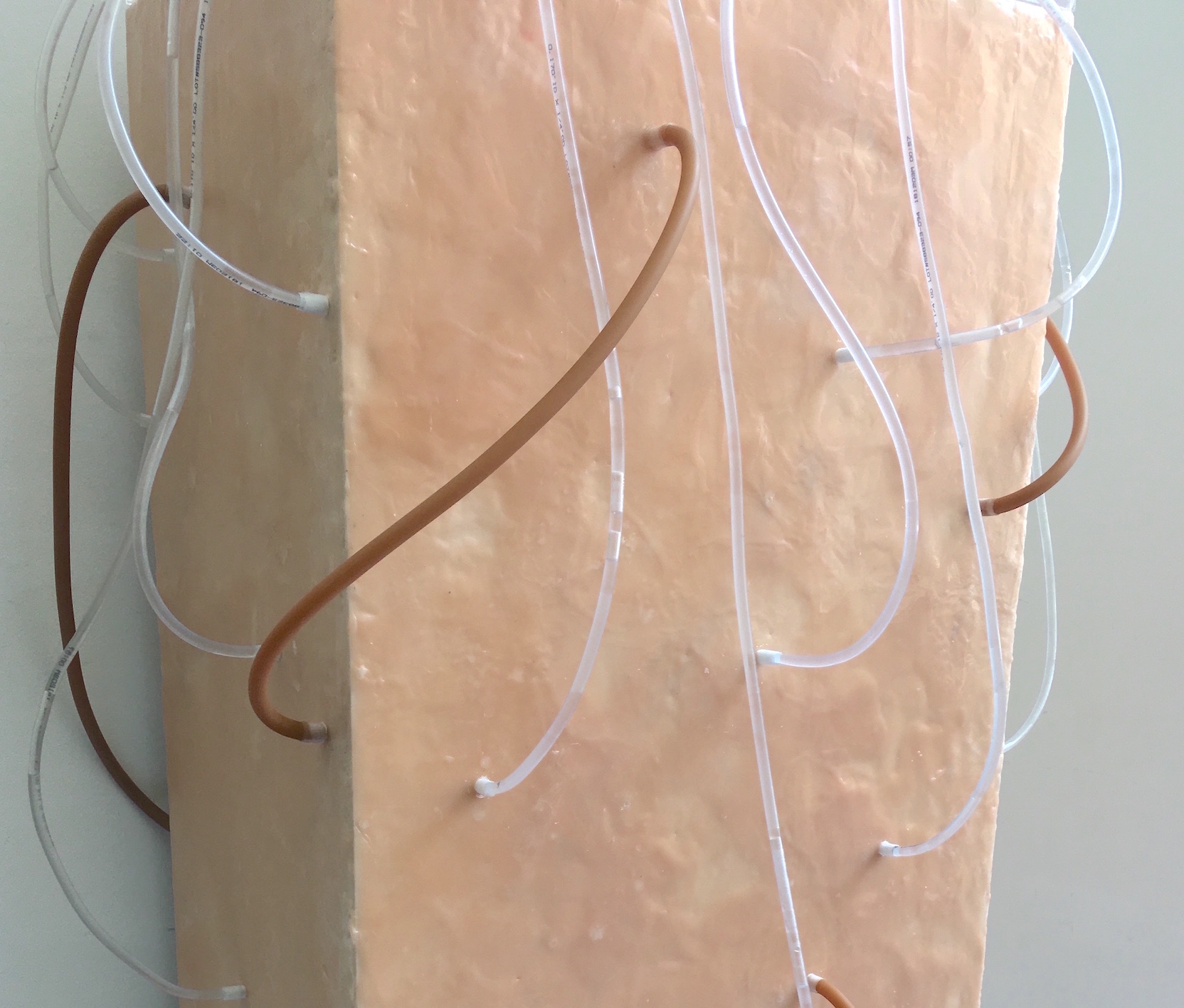 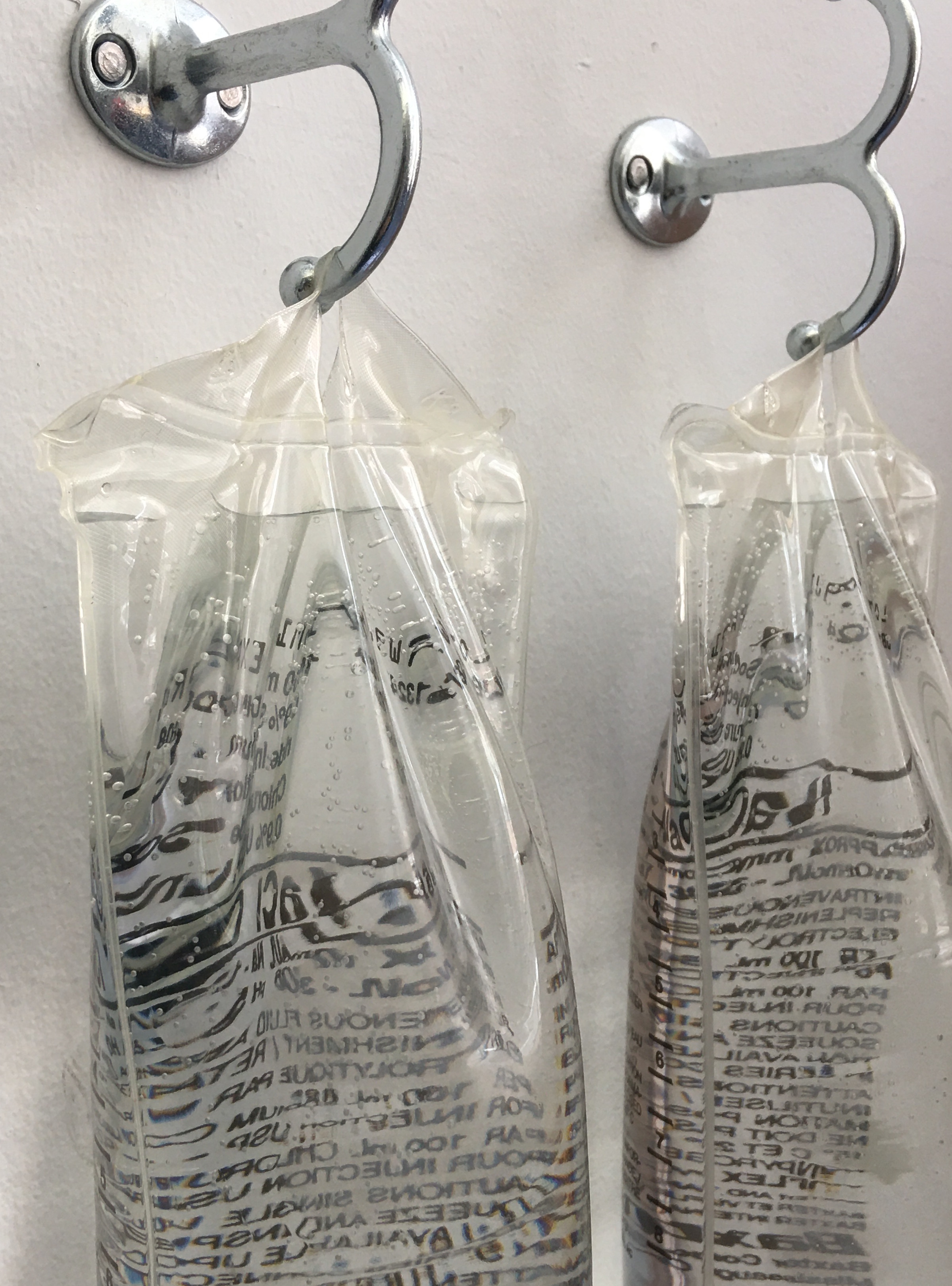