Recently, Cunaj has become fascinated with the subject of "Cardology"; an area of popular inquiry with expansive coverage through the open internet. This area of focus considers standard playing cards as metaphorically representing all aspects of human existence:

Proponents of Cardology claims that each individual card corresponds with a day of the year, so one's birthday can be correlated to a particular suit card which will then offer--in a similar manner to zodiac readings--insight into one's personality traits and character.

The library does offer sufficient scholarly materials on playing cards (subclasses GV1233 - GV 1236) and tarot (BF1751- BF1879); however, considering playing cards as a metaphoric representation of the physical, social, and psychological aspects of human nature is not representable in the strict subject hierarchies of Library of Congress Classification. Likewise, the absence of the concept of Cardology from LCSH subject authorities does rather overtly prejudice this area of popular inquiry; if the term does not exist in the Library of Congress weltanschauung, then the automatic assumption is that the topic does not exist.

Considering playing cards as bridging spiritual, psychological, and psychical realities might be appropriately placed in the BF psychology or BL religions/mythology subclasses, yet this interpretation is only made possible through the use of visual imagery and symbols, thus subclasses CJ numismatics; CN inscriptions; CR heraldry; CS genealogy could be more appropriate symbolic representations of the "aboutness" of Cardology. The placement of the table installation directly between these sections offers a compelling representation of the liminality of this particular metaphysical interpretation of a standard deck of playing cards which truly--based on a dictionary definition of the adjective--explores the intersections between "mind and matter, between substance and attribute, between possibility and actuality."1

Beyond a full Foucauldian critique of the "order of things" in libraries, Cunaj does offer clues of how a library can still empower the spaces between subjects through allowing free exploration of open stacks by browsing in uniquely individualistic ways; ones that are free from the mediation of a librarian. Similar to Diego Franzoni's site-intervention Underlining Research (2006), Cunaj elevates the often conceptually chaotic practices, possibly even qualified as intellectual games, that our creative researchers play when using library collections.

The element of trust that libraries give to library users might also be understood from the lack of any security measures for the playing cards, boxes, or books displayed. As the artist wants to expand on this work in future creative explorations, she sincerely hopes that nothing will be taken. A similar ethos is exercised everyday in libraries across the world; the risk of losing information objects through theft or willful damage is a worthy price to pay in order to make these information objects accessible with as little intermediation as possible.

By far the most perplexing aspect of the work--one that was discussed extensively in the final critique--was the lack of any particular rules of play, the deliberate obscuring of any symbolic representations on the playing cards, and the lack of any chairs; all the features that seem to be absolutely requisite at a card table! Is Cunaj indicating that libraries, in trying to replicate or even recreate the world inside the walls of a library through its collection, deface the character of reality through an obsessive simulacrum conditioning? After all, by collecting books (a symbolic mimicry of human thought and speech) and organizing them in a procrustean set of LCSH main classes (a Western European narrative that enforces a uniformity and conformity without regard to natural variation or individuality), the library is structurally based on a series of representations of representations in a Baudrillardian cycle of mirrors of production.2

But hope is offered by the presence of the individual card--in Cunaj's case the four of diamonds. Within the controlled vocabularies of academic research, organizations schemata, and library policies, one still can find one's voice and, in fact, use the knowledge of others to amplify it. Although the "game" of research within a university is challenging and oftentimes completely inscrutable for students, it is important to not lose oneself in the deck of seemingly impassive blank cards. Incorporating the hidden LED light coil below the table also helps emphasize that the sense of wonder and mystery--emotions oftentimes associated with libraries--must still be kept close and underlay each of one's creative research journeys. Interestingly in the final critique, the first student to speak actually gasped an involuntary note of pleasure, claiming that the work exactly reminded her of a childhood belief that in every library resided a hidden magic portal to an alternate reality. She was never able to find them herself, but was firmly convinced that such threshold doorways were there...and only the librarians knew where they were located. Cunaj seems to develop this further: providing access to an alternate reality is not mediated by the librarian, it occurs every time someone looks beyond the rules of library organizational schema and opens oneself up to chance, discovery, and mystery in the microcosmic world of ideas hidden between Library of Congress subject headings. Cardology may not have a subject authority, but it is there if one approaches the research game with self-awareness and a willingness to re-write the intellectual rules of play. 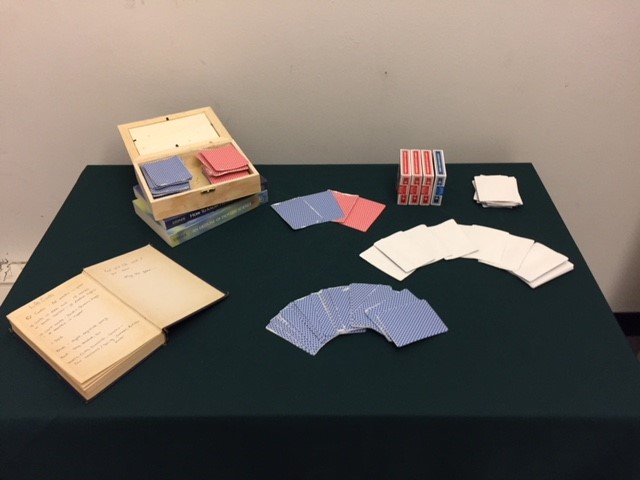 A card table was installed at the south end of the Library stacks between Library of Congress sections B and C. Several books, a wooden box, and a sketch book were placed on the top, along with a number of decks of cards; almost all are painted white on the front, thus obscuring the suit and numbering with the exception of one particular card: the four of diamonds.

The notebook includes written descriptions of “Cardology” a popular culture area of metaphysical inquiry that, not surprisingly, yields no results when entered in the Library Catalogue.

Although several decks of cards are made available to viewers, seemingly inviting people to play while in the library, there are no chairs at the table, the suits are obscured, and there are no “rules of play” provided.

Finally, only on close scrutiny, viewers might notice an LED light string glowing beneath the table and faintly observable through the green baize table cloth. It might be noted that the artist, Besire Cunaj, did not mention this feature during the design process consultations, nor during the final critiques held in the library with her peer students from the DRPT 4011 "Painting in the Expanded Field" class. 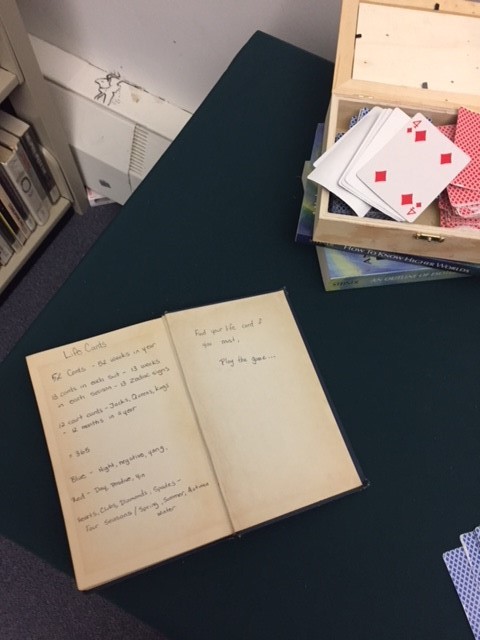 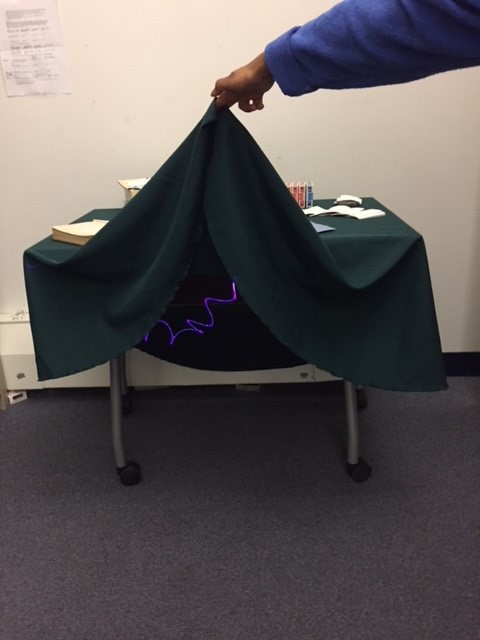