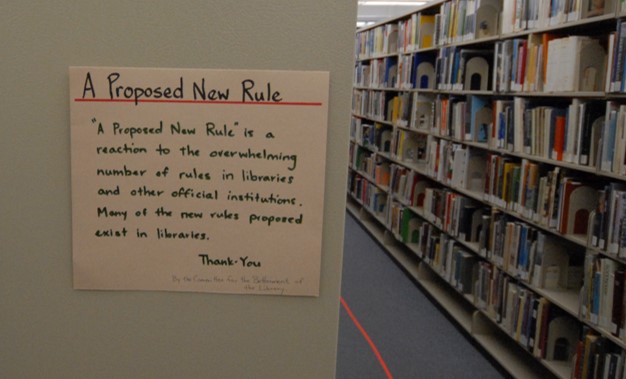 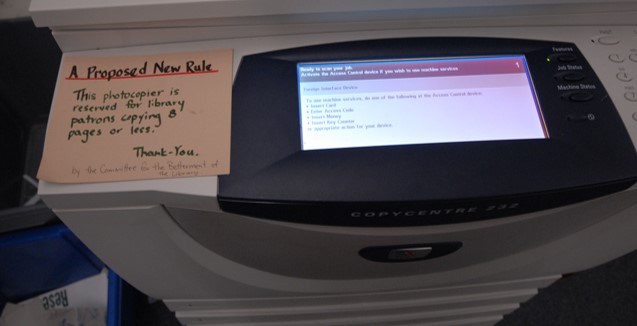 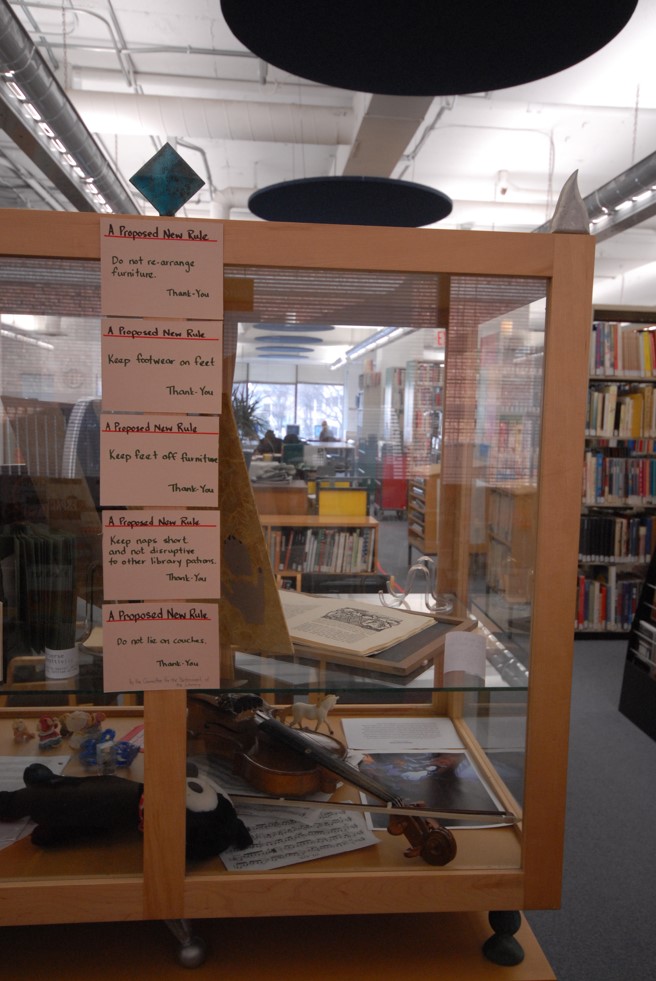 Kaitlin Chasowy explored the tension between library policies and user-centered service ethics by bombarding the OCAD U Library service areas with small library catalogue-sized cards with "Proposed new rules." In all approximately 30 were posted most of which  suggested rather draconian measures to guide, or perhaps dictate, user behaviour. Jauntily tacked onto the sides of computer  monitors, affixed to reading carrels and group work tables, perched on display cabinets, the cards initially seem to encourage users to read and talk about these new policy changes, yet the sheer number, with their repetitive bold title "proposed new rule," soon become visually oppressive for the viewer. On a surface level, the work overtly criticizes autocratic library policies; however, it was in gauging the reaction of users that the work was fully realized. In general, a surprisingly small number of students inquired about the cards despite the sweeping and authoritarian nature of many of the proposed policy changes, which, sadly, hints at a user population overly saturated by regulations. It is only when one of the cards directly impacted on a user in his/her research needs that the ‘proposed new rule’ became an issue. One student, for example, after reading that a large table could only be used for group work, sheepishly asked whether he could sit and read at it, despite the fact that the Library was almost full and the ‘group study’ table
was the last one available.

Chasowy pushes the delicate balance of our "user friendly" ethics. In levying fines, blocking patron records, restricting food  consumption or enforcing quiet areas, librarians believe they are working in the best interests of the collection, which ultimately– although they might not realize it – benefits patrons. Yet with such strict standards, can libraries truly claim to be user-centered? Do libraries in fact impose regulations on a user population that has no choice but to obey? An informative example occurred with one "proposed rule" card affixed to a group study table, which, after several days on display, was inscribed with graffiti by an apparently unimpressed student (Fig.5). This offers an additional layer of meaning to the installation: when libraries use dictatorial policy statements posted on signs or posters as a means of communicating, students will often respond with their own dictatorial answers, in the form of graffiti or vandalism. Chasowy demonstrates that policies must be the starting point for negotiation with patrons, and be used to foster positive dialogue rather than as a forum for confrontation. 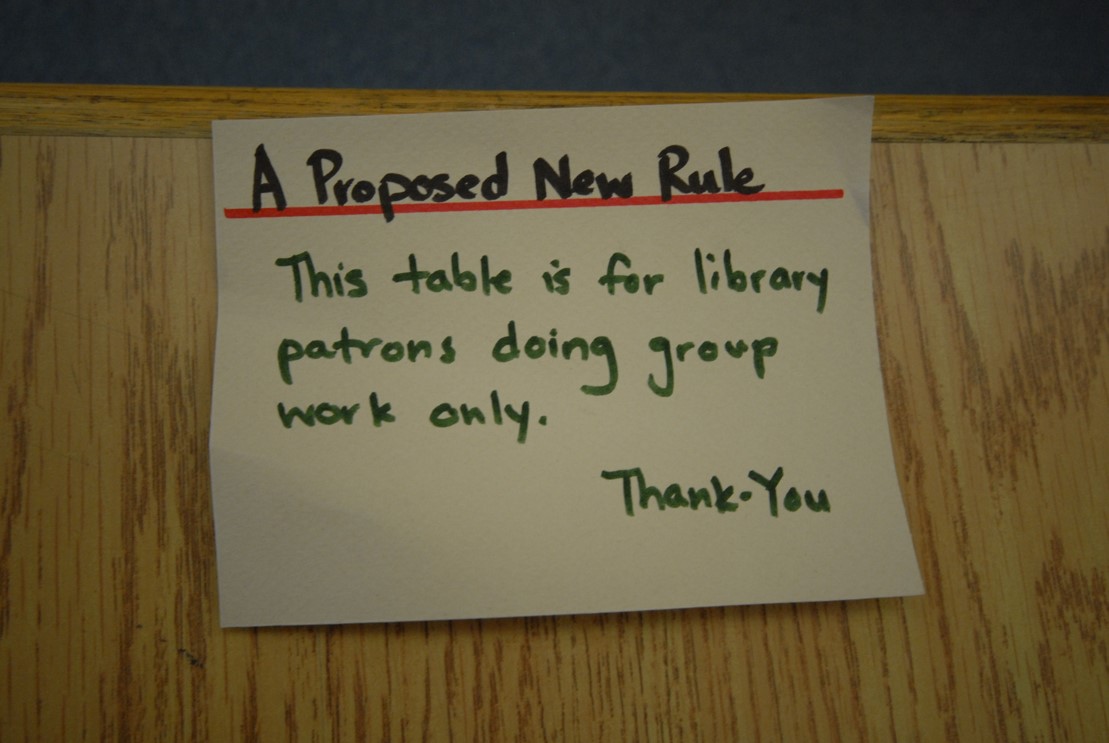 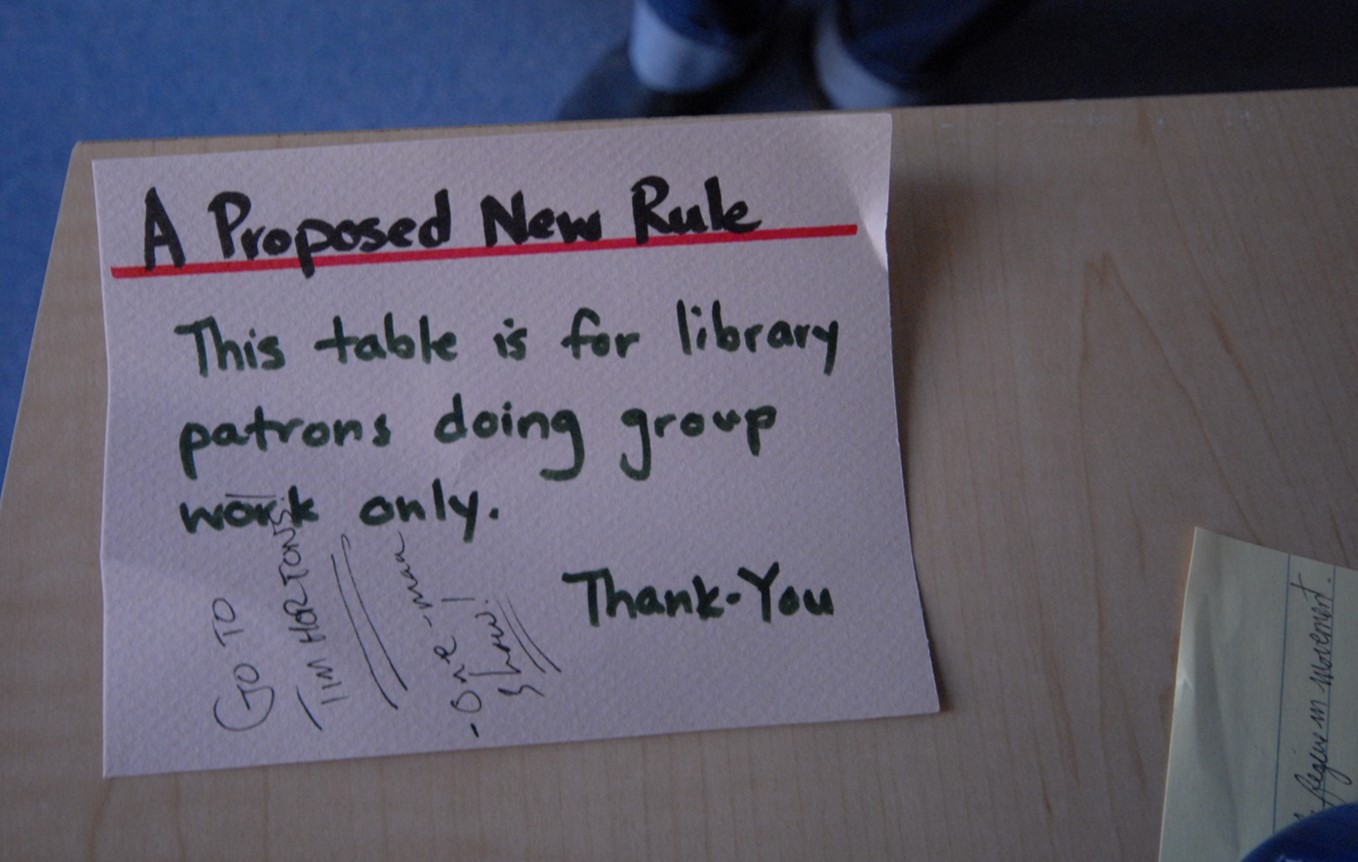