Julia Balfour describes how the inspiration for the site-intervetion cam from Henri Lefebvre's The Production of Space (Blackwell, 1991) and how it led her to "find forms" in the OCAD U Library's space to to consider how they function:

I will use forms ranging in shape and location. Each mark will be from different sections of the library. I will look at the marks on the floor, the marks left behind from students and the marks made by faculty. I will trace them and incorporate them into a book. The book will be formed as a collective collage and each mark will have a dotted line surrounding them, indicating to the reader that it is possible for the shapes to be cut out. After they are cut, they could be put back into the same space or into another space. This notion of "cutting it out" connects to the second part of the installation.

The second part will consist of the same forms cut from the book but painted onto tuff-back paper and then strategically placed back into the library. I will also arrange them on the floor where the book is located to suggest the shapes have fallen out. The pieces of paper can be walked on, as they will be flat and adhered to the floor...(Unpublished artist's statement, 14 February 2018).

When Julia approached the OCAD U Librarians proposing that she was going to pore over the library walls and floors in minute detail, measuring each crack, gouge, pockmark, scratch, or random act of doodling on the walls, we were quite frankly bemused. The first question that arose from all library staff who were consulted on the project was a hesitant, slightly confused "but...why?"

However, when considering the "spatial triad" of theorist Henri Lefebvre the deceptively simple intentions of the project take on profound depth. According to Lefebvre, all human spaces are shaped by three "layers" of meaning: conceived, perceived and lived spaces. Each have physical vestiges, but are essentially psychological, if not philosophical narratives used to make sense of built spaces. Conceived space, is the abstracted domain of maps, floor plans, rules, regulations, controlled vocabularies, standards and the myriad other bureaucratic frameworks that govern social environments. Embedded in this web lies the perceived domain, or how we feel in a space, with potential reactions ranging from fear and intimidation to a sense of freedom and purposefulness. Lefebvre envisions a final layer: the space of daily activities; our lived spaces. Here is located the pathways of daily rituals, habits, patterns and routines; most of which are executed unconsciously by rote. A person’s interactions within the spatial triad is called “spatial practice,” and these processes lead to the “production of space” (Lefebvre 36 - 40).

Conceived Space: one might subversively read an institutional critique into the analytical measurement and data collection of the the library's interior condition. Is Balfour asking why the library is in such a state of disrepair? In fairness to our dedicated circulation and access services staff, the collection is impeccably well-maintained; however on closer inspection of the physical space, the resonance of past signage, nail holes from earlier art exhibitions, bumps, nicks, scratches, and general wear and tear have left surfaces that are in serious need of wall-work. Balfour's patiently meticulous analysis--as if conducted by an official governmental inspector--seems to convey the message that students have to go to such mundane levels of labour in order have funding accorded for this basic level of maintenance; an especially powerful plea when considering it is so essentially dedicated to independent student research, inquiry, and engagement. It might be noted that OCAD University's new academic plan (2017 - 2022) is titled "Transforming Student Experience." To finalize this literal interpretation: the presence of shapes torn from the text and falling to the ground almost inevitably invoke a sense that, in reference to William Butler Yeats's iconic poem, things are falling apart and more chillingly that the "centre cannot hold."

Pehaps Balfour is making an analogy to the laborious work, that is largely hidden from the public user, conducted by cataloguers who encode the "aboutness" of books so that they may be plotted scientifically onto the Library of Congress conceptual spatial map.Subjects headings become the most significant framing device for physically structuring the academic library; by proxy, this conceived architecture of subject analysis indicates to users where books and the ideas encoded in them are to be positioned in the hierarchy of ideas in Western European culture. Is Balfour playfully questioning the futility of such endeavours? The presence of splotches of colour below the book on the shelf viscerally evokes images of stains on the floor that have dripped from the book (see figures 2 - 4) almost conveying a gruesome message that the emotive textual life-blood of the publication has been squeezed out of its cover. From a users' perspective--especially one who may not be knowledgeable about library organizational structures and is likely intimidated by this gap in knowledge--is there a sense that the unique perspectives and voices of individual authors are subverted by the meta-narrative of LCSH controlled vocabularies?

Perceived Space: Balfour's simplistic, almost child-like colouring book, in a way, feels as if she is expressing frustration at how many of her generation have forgotten how to use libraries. The use of such an elementary level publication does not serve as a metaphorical primer on the power of research in the physical space of the library, but becomes an instructional guide indicating that people can actually use a library for research! This cynical reading, however, is deceptive; essentially her intentions are less judgmental: she is helping her peer students overcame an irrational fear of libraries that seems so enshrined in popular culture memes. It's really quite a simple process: just come in to the library and make yourself at home.

If there are any questions about the patient pedagogic guidance Balfour offers to her viewer/researchers, considering the location of the small pamphlet assuages these doubts. The publication is positioned in the library's Quick Reference section and--perhaps with a slight nod to the negative conceived reading posited above--there is no call number assigned to the book.

Lived Space = The Production of OCAD U Library Space: clarifying the entirely of Balfour's message can only be accomplished after considering the time-based aspects of her laborious task; one that seems so purely inutile. Thus reading her work solely on a conceived level misses the full message of her artists' book medium. The careful, almost archeological attention given to past usage of the space seems a profound homage to students, staff, and faculty in their own anonymous sense-making journeys. The pathways of their research through the collection are hidden, ephemeral histories that cannot be mapped out or statistically analyzed other than through the falsely deceptive circulation counts of books signed out. These latter metrics cannot convey how perceptually meaningful interactions were with individual books within the context of the library's collections. This autotellic, exploratory process through the print collection defies quantitative analysis or narrative description and can only be considered as a lyrical feeling that merges the conceived ideas of researchers, whether they feel inspired to achieve creative flow, and ultimately how their physical bodies navigated through space.

A librarian may feel that success in perceived and lived space can only occur when students know the conceived spaces of libraries in how they are organized, how to search within these paradigms, and how to use the information retrieved. But, essentially, Balfour is guiding people, encouraging them not to worry about this top down approach; simply begin exploring the stacks and you will likely become inspired (the perceived spatial layer) and out of this process emerges a gradual understanding of how the conceived space of libraries work.

Balfour chronicles this movement up the spatial triad using an inductive approach, where researchers work from confusion to clarity based on their own terms starting with their own individual information needs; a procedure that is made possible in libraries through interaction of body, mind, and senses in a profoundly spatial manner. The shapes of residual wall marks tracing spatial practices of previous users serve as mnemonics, perhaps even hieroglyphic traces of these sense-making processes conducted in the past. As they spill out of the library instructional booklet Balfour produced, she encourages viewers to walk on them, using them as breadcrumb-like wayfinding paths through the collection. As she indicates in her own words, "After they are cut, they could be put back into the same space or into another space." The production of creative space enacted in the microcosm of the OCAD U Library collections can and should be mapped onto to other physical and virtual worlds and the process is so surprisingly easy; but it's up to you to take the first step. 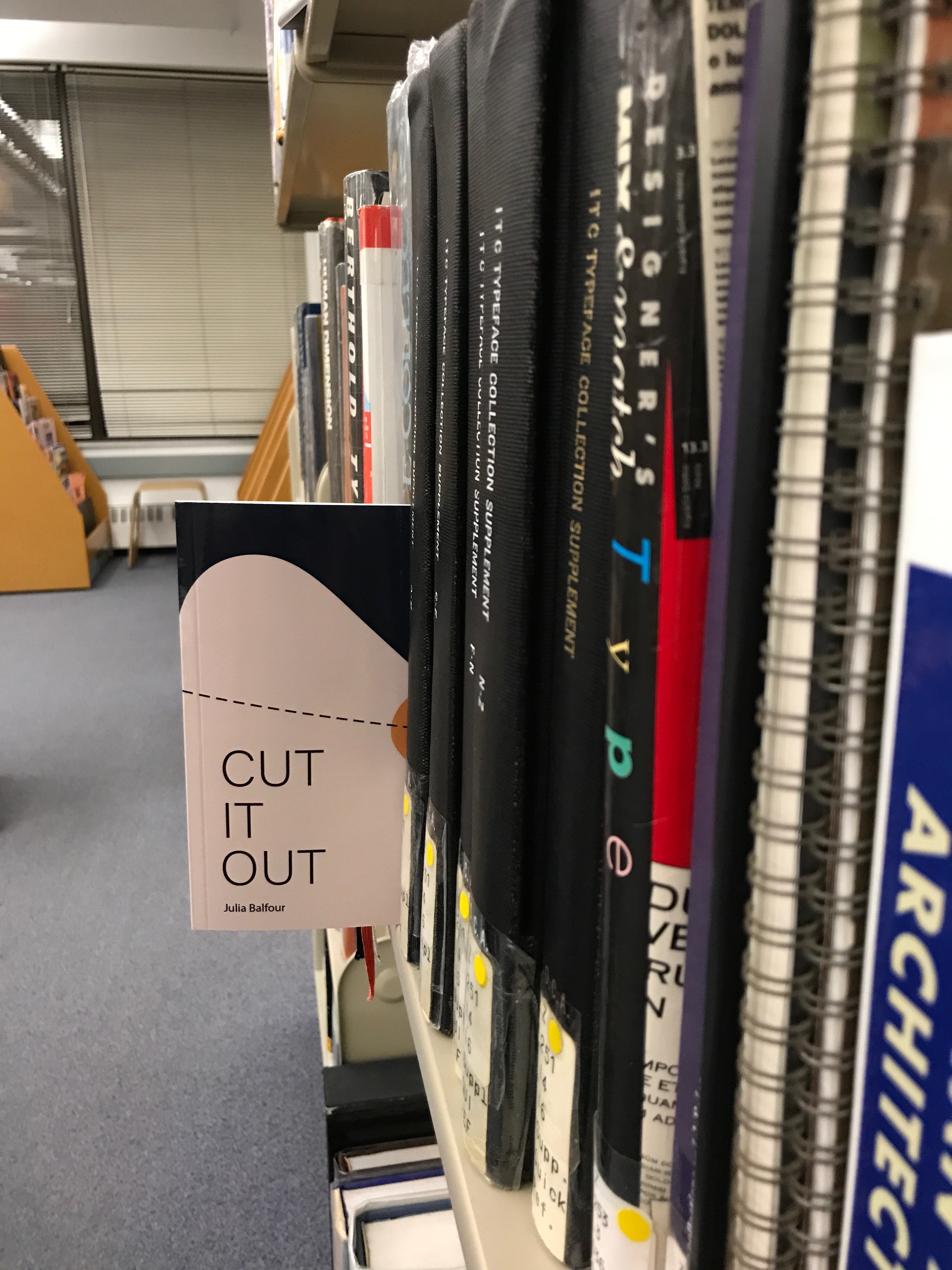 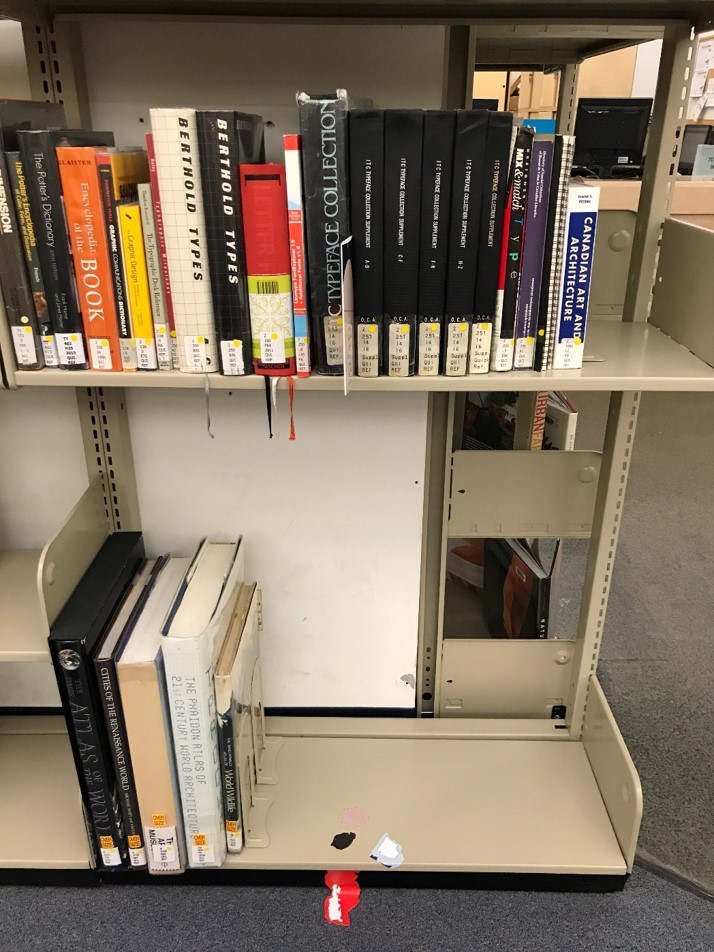 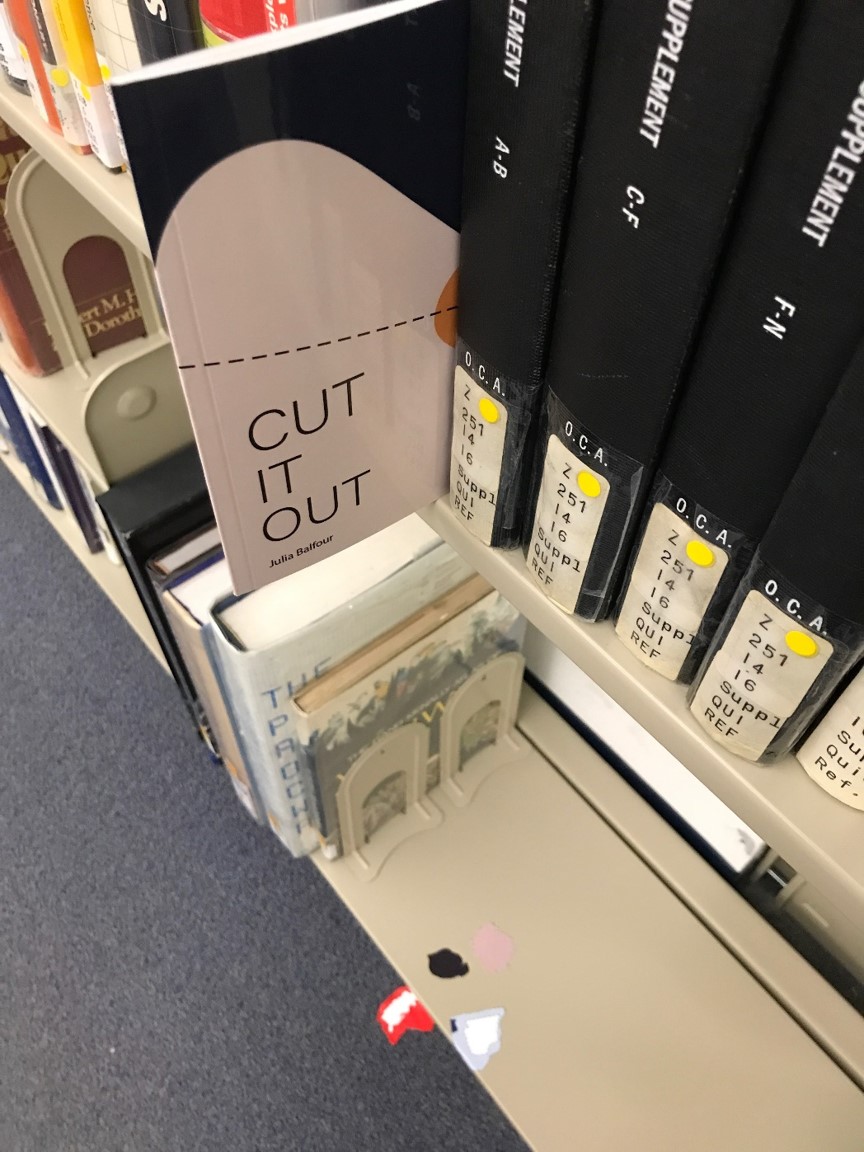 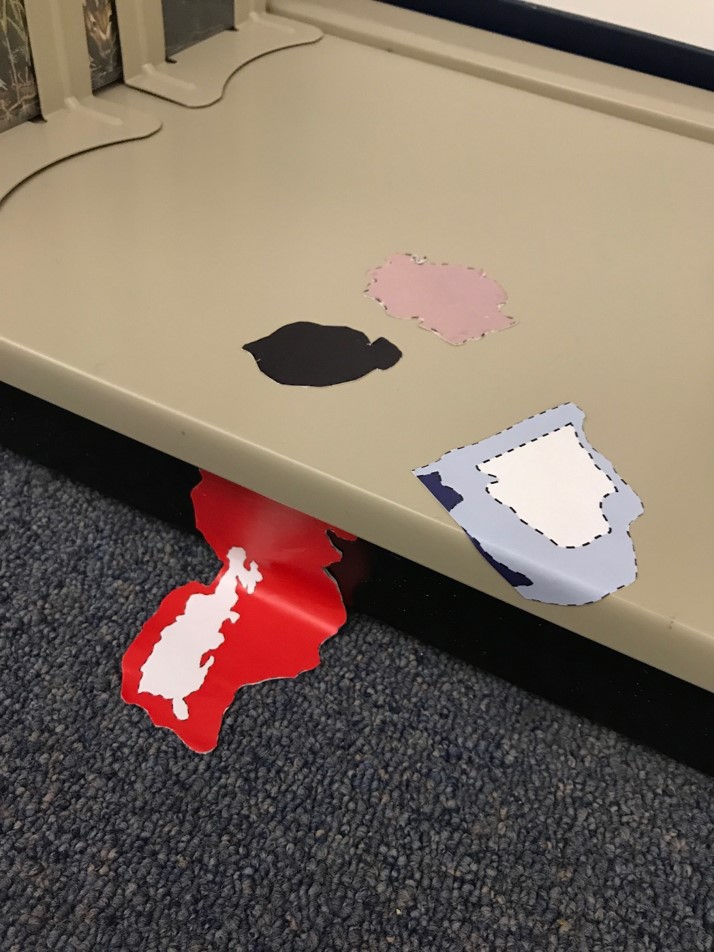