The OCAD U Library wishes Reference & Access Services Librarian Robert Fabbro all the very best on his retirement in June 2017.

Working at the Dorothy H. Hoover Library since 2003, Robert has dedicated his career to providing unparalleled service and dedicated support to the OCAD U community, serving as Faculty of Design subject librarian and liaison for the Materials Library, coordinator of inter-library loans and document delivery, and accessibility services liaison for the library. His active portfolio of information literacy seminars for a broad range of design courses helped generations of students empower design thinking, engage with creative ideation, and perfect their research skills.

In addition to his Masters' degree in Library Sciences, he holds two additional subject-specific MA degrees. Any who asked questions while he was working at the library's reference desk certainly benefited immeasurably from his impressive academic credentials, yet it was Robert's friendly, open, and eminently collegial demeanour that ensured all those seeking reference help received supportive, nurturing, and enriching research guidance.

We will all miss you Robert, but wish you much happiness and fulfillment in this new direction in your life! 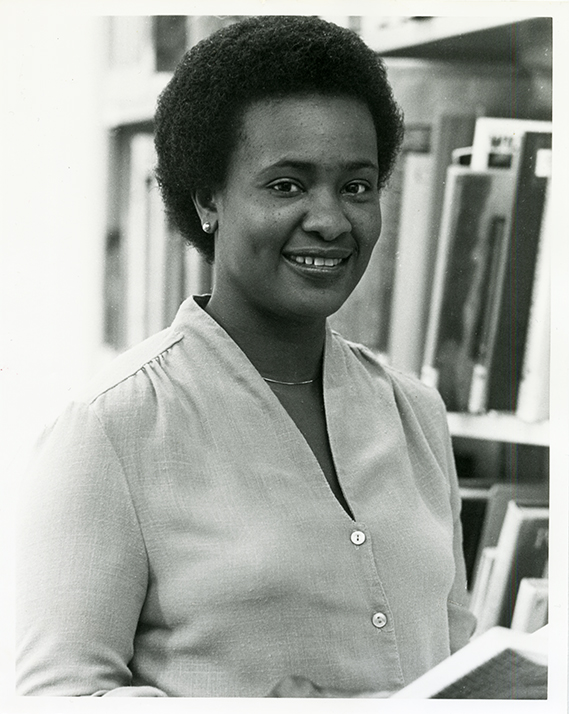 If you look at the seniority list, Esther Soltau -- the library's Aquisitions Technician -- has been at the top for quite a while. Esther started working in our library in 1975. Through her departure -- she retired at the end of May -- we lost not only a funny and charismatic coworker, but also a fount of knowledge about the history of OCAD. Here's some of what Esther remembers about her time working here:

What drew you to working in libraries?

I don't know. I love books and I used to be a really big reader. So I was in Jamaica, there was an opening and I got the job there. And it's been libraries ever since. I worked there for many years and then I came [to Canada] and my husband said "there's a job at a library in the paper" and I applied and I started working here.

How has the library changed in the over 40 years you've been here?

But also the location. [The library] used to be located across the street [in 100 McCaul] and this relocation [to 113 McCaul] was only supposed to be for 5 years. Now it's been closer to 20.

What is your fondest memory of OCADU, or the people you've worked with?

My memories go way back to when we had a courtyard and a Japanese tea garden [when the library was located at 100 McCaul]. It was a fun place, lots of parties. There were lots of people I think about all the time. I think of Dr. Fleck who was the president [1975-1982]. He taught me about fiddleheads. There were a lot of ferns in the courtyard and he told me about eating fiddleheads, that's something that I'll never forget. "Fiddleheads, hmm, what don't they eat?"

And Peter Caldwell [OCAD's first VP of Finance and Administration from 1994 to 2011]. When he came, we used to have one computer in the office and we had a timetable [to schedule] who used the computer when, and there was a cubbyhole to keep phone messages. When Peter Caldwell came he changed all that. Everyone had a computer and a phone on their desks. We got email and voicemail and everything. It wasn't just the library, it was the entire institution. So I give a lot of credit to Peter. He's the best.

I've talked to you about ghosts in library services before. Do you want to talk about the ghosts?

I was thinking about this the other day, and I'm thinking "It's so strange that this thing happened. I still can't get over it." I could see a person head-to-toe and I waited for the door to close and there was nothing. There was a donation on the table, some magazines from someone who passed away, and Jill [Patrick, Director of Library Services] said it must've been her. I still think about it. It doesn't bother me and I'm not scared. I just think there are all sorts of things in this world that are unexplainable.

What are you looking forward to after you leave?

I can't sleep in. I still have to get up and have my coffee.

I'm looking forward to getting myself in a healthier condition: going for walks, going to aquafit classes. I'll be doing a lot of walking and I hope to travel. If I can only get the courage to get on a plane and go abroad. I'd like to go to England to visit my nephew. There are many places I'd like to go. I'd like to go to China to see that wall. Apart from that I think I want to see Canada. There's a lot to be seen here. I'm hoping to get to Newfoundland this summer, and my daughter said I should go to Vancouver. I want to do the east, west, and north. Spending time with my kids comes in between. I need to do things for myself first.