Meet our newest librarian, Chris Landry. The Dorothy H. Hoover Library has been fortunate to welcome Chris for a one year contract to guide us in managing our OCAD U Open Research institutional repository.  His ground-breaking work has allowed us to digitally archive and provide stable access to the academic production of our graduate students, faculty and staff.  His work has shown how OCAD U can celebrate and promote our intellectual capital in an open forum for all!

As well, for the past year Chris has offered us invaluable reference help both physically in the library and virtually through our Ask: Chat with a Librarian service.

Learning Zone Technician Lindsay Gibb (see "Who's that Working in the Library" from the Winter 2016 newsletter) sat down with Chris for a discussion on his work as a librarian and a zinester.

Who's that working in the Library?

You are/were a zine maker and there are some zines of yours in the Learning Zone’s zine collection. Can you tell us a bit about your zine history?

My experience with zines goes back to the 90s. I loved to read and makes zines, trade them through the mail with other zine editors. I would seek stuff out by reading reviews in the back of fanzines like Maximum Rocknroll, Punk Planet (now defunct), and HeartattaCk (also defunct). I still have friendships with some of the people I met through trading zines and it was a really exciting, passionate part of being into punk rock as a teenager while living in a sleepy suburb. Every year or two I’ll still make a zine. I also review zines for Broken Pencil magazine.

You used to work at the Toronto Zine Library. Is that what lead you to the library world, or how did you end up working in libraries?

Well what I originally wanted to was be a conservator of film and photographs. After my undergrad I interned at Library and Archives Canada where I worked on stabilizing nitrate film – this old, super flammable film stock. My title was Archives Assistant at LAC and the conservators I knew there had over ten years of education and some of them were still in somewhat precarious careers. At some point I decided I wasn’t going to be conservator, so I thought about becoming an archivist. When I moved to Toronto and started volunteering at the Toronto Zine Library around 2010, two of our core members were librarians. After years of being kind of wishy washy on the library school thing I finally went for it.

Before joining the OCADU Library you worked at the Pride Library in London. Can you tell us a bit about that collection and your part in it?

The Queer Graphica collection at UWO’s Pride Library is a really neat resource. Two local donors provided the library with boxes of zines and underground comics many of which were LGBTQ+-oriented. I was hired because of my zine knowledge but I actually had a lot to learn about comics and graphic novels. I had heard of zines like J.D.s and The Salivation Army and Rag, but I didn’t realize the extent to which Toronto had influenced the sort of international underground queer punk scene at the time dubbed queercore. There was almost a complete run of Hernandez Brothers’ Love & Rockets, a ton of Tom of Finland stuff, and many of Alison Bechdel’s Dykes to Watch Out For. I was even afforded a budget to order more recent stuff for the collection. I developed a classification system with the help of library school friends and we held a launch where folks from across the campus and the wider community came out. It was a hoot.

Can you describe what you do in the OCAD U Library?

A lot of my work has to do with building the digital collection of Open Research, OCAD University’s institutional repository. An institutional repository is basically a digital archive that preserves and disseminates the research and creative output of a University. I often contact faculty or staff about participating. This can involve going through their CV and publications and checking the copyright policies of the places they’ve published to see what kind of permissions exist for depositing the work. Sometimes I need to contact the publisher or rights holder to determine if something can go in or not. Other times I have to consider the Copyright Act.

I assist users of the repository in depositing their own work. I am also working on training guides and video tutorials because we are slowly moving toward users depositing their own works rather than me doing most of them myself. On a policy level we are attempting to implement a statement of support for open access (a publishing model that supports barrier-free access to scholarship) and have it formally endorsed by the University as a way to engender support and awareness of the repository.

Another initiative we are looking at is providing support for digital publishing. OCAD University is going to deploy Open Monograph Press, open source software that manages editorial workflows for scholarly ebooks. We’re also looking into assisting with research data management through solutions like the Ontario Library Research Cloud. There are a lot of new tools and with them, new roles for librarians in this area we typically call scholarly communications.

Can you tell us about your favourite (or just “an interesting” if you don’t want to call anything your favourite) item in the repository?

Recently I deposited a book chapter by OCAD U Film and New Media Studies professor, Selmin Kara. Her chapter, Anthropocenema: Cinema in the Age of Mass Extinctions, appeared in the open access book, Post-Cinema: Theorizing 21st-Century Film, and looks at the concept of Anthropocene, which refers to the way in which human activities on earth are changing is ecosystems, biosphere and geology. Kara looks at how recent movies like Gravity, The Tree of Life, and Beasts of the Southern Wild illustrate this new epoch. I was a film studies major for my undergrad so it’s nice to see new scholarship in the area.

Why is the repository you’re working on important to students?

I hope that students can benefit from the repository in a number of ways. First off, it can preserve their works or documentation around their works such as essays, images, audio, or video. As our students graduate and move on to their careers and move away, sometimes files and works get lost. Open Research offers a stable place to collect this material. Secondly, the repository is indexed in the library catalogue and major search engines and as such it can increase the reach and impact of student work. For example, our most popular item is a student’s major research paper called, Lady Gaga and the Other: Persona, Art and Monstrosity which at the time I write this has been accessed 710 times! So it’s really a way students can get their work out there. Thirdly, the repository can be a recruiting tool, prospective students can look at the types of work that happens here and use that to inform their decision to enroll here. For graduate students embarking on their thesis, the repository provides quick and easy access to past theses which can serve of examples of graduate-level writing.

Who's that working in the Library? 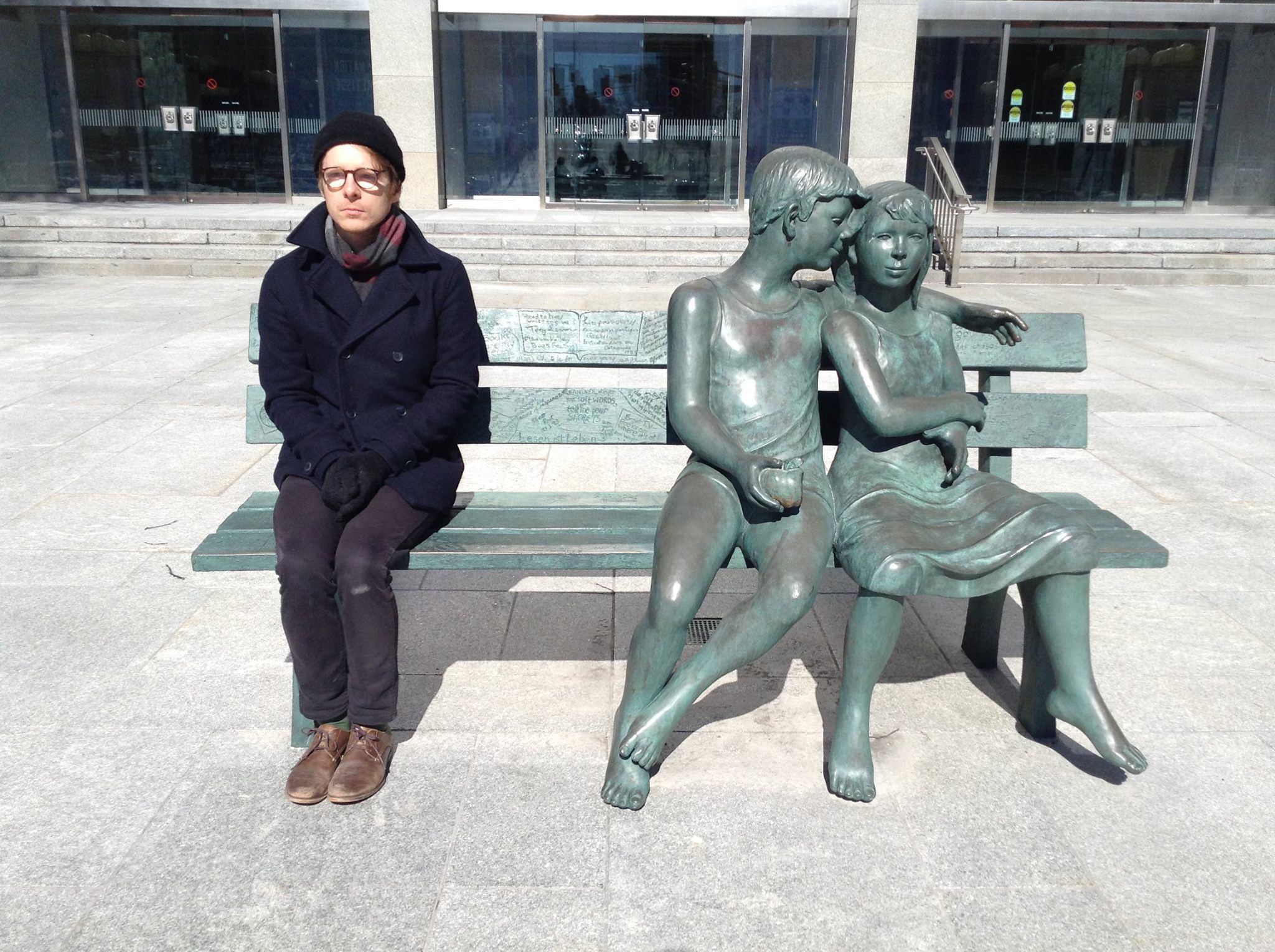 Chris sitting on the The Secret Bench of Knowledge (Lea Vivot's iconic 1993 sculpture outside of Library and Archives Canada). 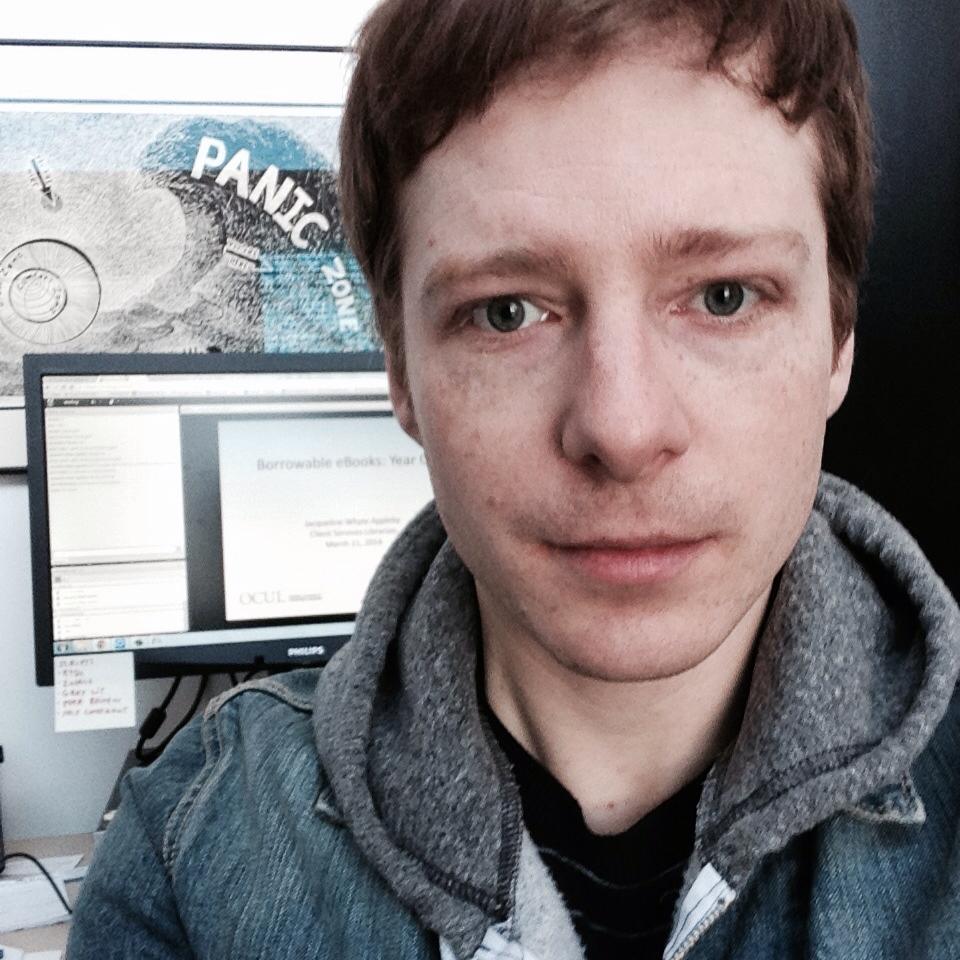 Chris sent us a few images of himself, as well as a meme image summing up his feelings about Open Access! 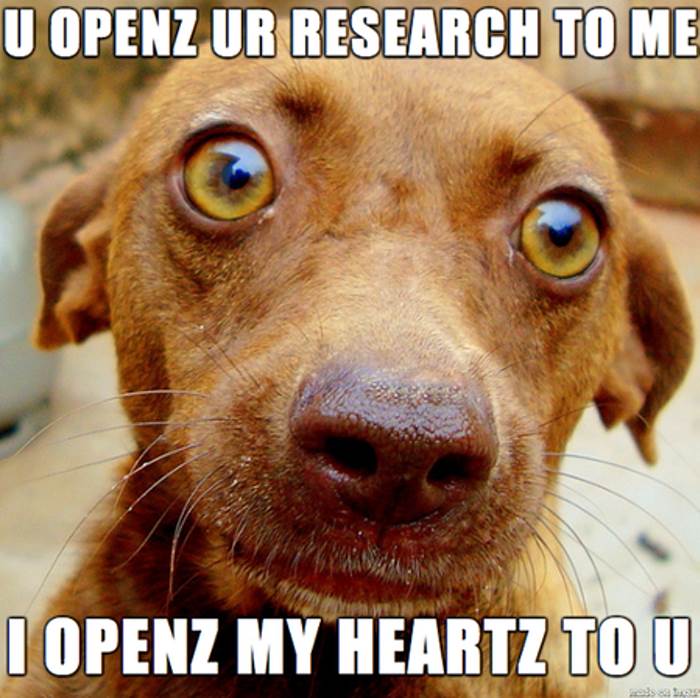